Carriers use a wide array of tactics to find and keep drivers, but results from a recently published survey show there’s overwhelmingly one thing fleets can do to accomplish their recruiting and retention goals: Raise pay for drivers.

Nearly 80 percent of the thousands of drivers surveyed nationwide by National Retail System said salary was the most important factor when choosing a job.

Home time ranked the second-most chosen factor with 67 percent, while “benefits” ranked third with 52 percent. Survey respondents were asked to select up to three.

NRS’ east coast recruitment officer David Bullins said home time has become more important of late due to hits in productivity and pay caused by the 2013 hours of service rule. Increased downtime, he said, “ultimately means less money so driversa re now making the push to become local drivers instead. Since drivers cannot run like they used to, home time has now become a higher priority.”

Forty-seven percent of respondents said new equipment was an attraction to a driving job, while 31 percent said company reputation was a priority.

Nearly 90 percent of the drivers surveyed said they’d had fewer than 5 jobs in the last 10 years, with nearly half (47 percent) saying they’d had 1-2 jobs. 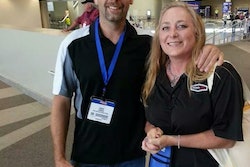