Remember the playground game? The class would split into two different teams and hold hands across the blacktop from each other, forming an “unbreakable” chain. Each side took turns calling someone over, and that person would have to run full speed at the opposite chain and try to break through. If they didn’t bust at least one person’s wrist and make it through, they had to stick with the side they ran to. If they did make it, they got to take someone from the other side to theirs. The team with the longest chain at the end of recess won.

Of course, no one plays the game anymore. It’s been frowned upon in public schools since children evolved into such delicate little creatures and the Politically Correct Brainworm took over.

Dear Parents,
Due to new and improved policies to help our school has become as completely beige as possible — we will no longer be playing the game “Red Rover” on the playground. After careful review by our staff psychologist, we have determined the inability of some children to “break through” may be carried over into their personal lives and they might begin to feel bad about themselves. Also, there are racial undertones in the very name of the game, and we have determined that “Red Rover” will most definitely harm the psyche of any Native American students we may have, especially after we make a big deal about it in the press. We appreciate your consideration in this matter, and would like to remind you that fees for the Great Participation Award will be due next week. Any student who shows up breathing will be lauded as a hero and made to feel like a superstar for doing the bare minimum. Remember, these awards help us build a society that feels good about themselves, and that’s all that matters.

I was reminded of Red Rover the other day when George got a call from an agent who wanted him to do a grocery load to a Walmart DC. Let me pause for a brief moment here and just say God bless anyone who does grocery or reefer on a daily basis. It is, in my opinion, the crappiest part of trucking. Between the ridiculous amounts of time spent at the dock or in the cage waiting, the lumper fees, and having to deal with places like Walmart, it just flat out sucks to haul grocery. Which is why he won’t do it anymore.

I listened to him tell her he didn’t do grocery anymore, and apparently she was pretty desperate, because he also told her the only way he’d touch it is if she added $1,500, because he was going to have to burn a day delivering it, and wouldn’t even try to book another load until it was off, because you never know when you’re going to get stuck at a grocery dock for 20 hours. It happens. He hung up and shook his head.

“What’d she say when you told her you wouldn’t touch it without an extra $1,500”

“She offered me $250. Which is about what the lumper fee is over there. She was pretty good, she said she called me because I was one of their preferred drivers who was always professional and on time.”

“Aww yeah. She was selling it. She wants George Parker to break on through the Walmart chain and bring them over to her side.”

“I have no idea what you’re talking about, but don’t fool yourself. Agents are sales people — that’s what they do.”

“What are you going to do if she calls you back and agrees?”

“Will you take me home first?”

Dammit. I didn’t hit the chain hard enough and now I have to stick with the other side. Life lessons from first grade that didn’t ruin my psychological state. Yay. 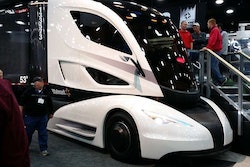 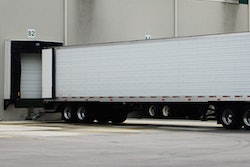 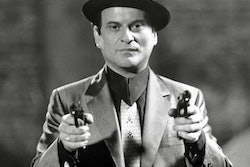