The Federal Motor Carrier Safety Administration’s work on increasing the liability insurance minimum for motor carriers caused much division at the Motor Carrier Safety Advisory Committee in May of this year. “About half the people on the committee felt like they were not comfortable with the final product,” noted MCSAC Chairman Stephen Owings at the opening of the MCSAC’s October 28 meeting.

You can download draft discussion notes from the May meeting via this link.

This week, the committee took up the May draft analysis again, with FMCSA Associate Administrator Larry Minor noting that the agency wanted the committee to give its “basic sense of what would be an appropriate range” of liability insurance minimums today, given the minimum hasn’t been changed since coming into effect in 1985: “Which range should we be considering, which inflationary indices should we be considering,” and etc.

FMCSA has had the issue on a fast track, with intent to get a proposal in order this year, but the MCSAC meeting delivered no further clarity on what the new insurance minimum might be. As previously reported, an Advanced Notice of Proposed Rulemaking is under review by the White House Office of Management and Budget and should be released “fairly soon,” noted Minor, adding that the agency “didn’t specify any numbers” in the notice but would be seeking input there from stakeholders.

Schneider National rep and MCSAC member Don Osterberg believed the best way to get a handle on appropriate liability minimums to cover all but the rarest of catastrophic accidents would be to look at the actual claims settlements in today’s world. “I’m not at all sure that looking at core or medical inflation based on the [current $750,000 minimum] number will capture the exponential increase in the cost of claims settlements,” he said. Only if FMCSA looked “at the rate of increase of the cost of claims settlements,” he added, would the agency “get a sense of what’s going on.”

Nonetheless, core and medical inflation are offered as approaches in the final report from the MCSAC as elements of what the FMCSA should consider in determining any rulemaking. As previously reported, core Consumer Price Index inflation considered alone would boost the current $750,000 minimum to $1.6 million. At the top end if inflation is consider alone, adjusting by the Medical CPI from 1980 dollars would yield a more than $4 million minimum.

While FMCSA continues on a fast track since announcing its intention to boost the minimum in April, justifying any large increase will be difficult for the agency to do, given the potential for a substantial increase to impact small businesses in a big way. TCRG Consuting’s Richard Wilson, in attendance at the meeting, noted the added costs to new owner-operator businesses could well exceed $20,000 yearly for insurance is a minimum near $5 million is ultimately selected. Wilson based his analysis on several conversations with insurance-company representatives, he said. For other estimates of potential premium increases, read this story.

Potentially good news surrounding the coming changes is that the MCSAC also urged the agency to consider a phase-in period to allow businesses to adjust to any substantial increase in minimums.

Views on the appropriateness of the liability insurance discussion were numerous; some MCSAC members felt rushed through the issue, particularly given a paucity of data to be analyzed to determine current claims costs, likewise the small percentage of claims that exceed current minimum limits.

Rob Abbott of the American Trucking Associations emphasized that the goal in setting a new limit was as previously construed to cover “all but the rarest” of catastrophic crashes. “You could cover every last one of the crashes and have the limit set at $50 million,” an untenable figure for most businesses. “We’re trying to balance ‘all but the rarest'” with financial and other considerations.

Owner-Operator Independent Drivers Association Executive Vice President Todd Spencer pointed out that the percentage of total claims that are estimated to not be adequately covered by the current minimums had not changed much at all since the 1980s, at less than 1 percent. “Most of trucking is small business,” Spencer said, cautioning against large increases and potentially negative safety impacts, particularly inadvertently removing otherwise safe operators from the road.

“The market will have to bear the cost of these increases,” said Osterberg, in the form of rate increases at the place where supply and demand meet. “I would argue it’s the small carriers that represent that intersection point.”

Whatever happens, FMCSA is required by law to conduct a cost-benefit analysis and to specifically review the impact of any hike on small businesses, Larry Minor emphasized. Whether too many would “end up going out of business as a result of this rulemaking, or come close to it,” he said, would be a primary consideration in the end. 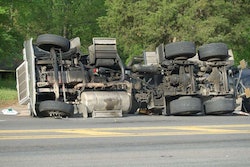