Amid HIV outbreak, truckers warned about prostitutes, needles in Indiana

Truck drivers are being warned to not engage in sexual activity with commercial sex workers or share needles for intravenous drug use along the I-65 corridor in southeastern Indiana following a major HIV epidemic that’s come on in recent months.

The state’s trucking association has joined a public awareness campaign about the outbreak of the virus, which can lead to AIDS. As of May 20 and since late last year, 158 cases of HIV had been reported in that part of the state.

Indiana’s health commissioner has also sent letters to 15 truck stops along the I-65 corridor asking them to support the awareness campaign by placing posters and flyers in areas frequented by truck drivers.

The campaign encourages those in the region to (a) not engage in sexual activity with prostitutes, (b) use condoms effectively and (c) not engage in needle sharing.

Most of the HIV cases in the region stem from needle sharing among intravenous drug users, officials say.

Truckers, however, are being warned not so much about needle sharing but about prostitutes along the I-65 corridor.

When the CDC studied people infected with HIV in Scott County, it found 10 of the women were what it called “commercial sex workers.”

Whitehall said anyone with concerns about possible infection should contact their primary care physician or their local health department.

I-65 is one of the major north-south highways in the U.S. It extends from the Indiana Toll Road in Gary Indiana 887 miles south to the intersection of I-10 in Mobile, Ala. 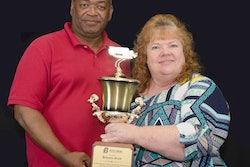