The protesting truckers say they are misclassified as independent contractors instead of employees. Potter said Pac 9 and XPO Logistics drivers have been on strike since July, but IBT truckers set new ground when they began the Oct. 27 strike.

“This is the first time in American history that workers misclassified as independent contractors have simultaneously demanded their rights as employees and their right to form a union,” he said. 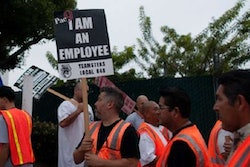