The Rhode Island Trucking Association has outlined an alternative to the governor’s proposal to fix bridges by instituting truck-only tolls to back $600 million in revenue bonds.

Island lawmakers ended session June 25 without approving Gov. Gina Raimondo’s plan to repair infrastructure with truck-only user fees on about two dozen bridges. A month before, the Democrat governor introduced RhodeWorks, a 10-year,, $1.1 billion improvement plan. It was to be included in the upcoming state budget and proposed tolling Class 6 trucks and higher before it was amended to affect only Class 8 trucks, once per location per day.

The House passed a budget without RhodeWorks, while the Senate overwhelmingly approved a truck toll bill that dropped fees from $6 to 3.50. Legislators are expected to revisit the issue when their new session starts in January.

The Rhode Island Trucking Association said the Senate’s plan, which added rebates and tax credits for state businesses, could violate interstate commerce laws. The association has criticized the Raimondo administration for not disclosing the proposed tolling locations so local business owners can gauge potential impact.

RITA’s plan excludes tolling, but does increase costs for truckers. It would create more than $220 million over four years, which is the amount RhodeWorks allocates to repair 453 bridges outside of the 6/10 connector.

After the fourth year, RITA’s plan will produce annual revenue of $25.9 million. The state transportation department could bond this revenue for the 6/10 connector or the entire package could be bonded to include all RhodeWorks projects listed.

The association’s proposal could be implemented immediately, while Raimondo’s plan would require waiting until 2018 to spend $43 million on tolling gantries. It also would:

The RITA plan and RhodeWorks both call for refinancing garvee bonds, which the association says will produce $121 million in first four years. The National Highway System Designation Act of 1995 authorized these bonds to allow state and local agencies to issue debt for transportation projects, using future federal highway funds to repay the principal, interest, and costs associated with the issuance of the debt.

Association President Christopher Maxwell says some traffic assumptions in RhodeWorks proposal are inaccurate, which could significantly affect projected revenue. “The governor has already admitted that if revenue projections do not pan out her only recourse would be to increase the tolls on the trucking industry,” Maxell said.

The association contacted the American Transportation Research Institute, which conducts transportation research, to examine some of its concerns over RhodeWorks. ATRI used GPS to evaluate trucking patterns, while RhodeWorks used a different method. 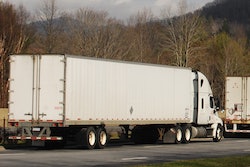