A recent survey of truck operators who travel Rhode Island’s highways shows that 76 percent of them will take different routes and bypass the state if necessary to avoid tolls that the governor’s proposing for commercial trucks.

The survey was conducted by the Owner-Operator Independent Drivers Association. Its results were released this week by the Rhode Island Trucking Associations.

RITA has been a staunch opponent of the trucks-only toll plan since it was introduced by Rhode Island Gov. Gina Raimondo, saying the state has been neither transparent nor fiscally responsible in addressing its deteriorating roads and bridges.

The state’s General Assembly reconvened last week and is considering Raimondo’s proposal to install $43 million worth of toll gantries that would target class 8 trucks, which she says are wrecking the state’s roads and bridges. Raimondo’s 10-year, $1.1 billion plan to repair the state’s worn infrastructure calls for tolls to back about $600 million in bond revenue.

However, RITA’s Maxwell says that in the long run targeting commercial trucks for tolls is bad for business and the state. “There are no other states that are actively pursuing tolls because most of them realize it’s a bad course,” he says. “It’s not the course you want to go if you want to have a stable, progressive, attractive economy.”

The Rhode Island DOT, however, disagrees with Maxwell. RIDOT Director Peter Alviti recently issued a one-page letter saying trucks get “more of a free ride” in the state.

Maxwell contends that the results of the RITA-released poll show the state’s tolls will not only run-off a core group of truckers, but will actually invite more financial woes.

For more on this story, see Overdrive sister site Hard Working Trucks’ write-up at this link. 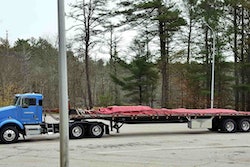