The Federal Highway Administration has signed 13 Memoranda of Understanding with the state’s transportation department. FHWA will execute a 14th agreement for the Providence Viaduct after the environmental mitigation requirements are met, according to RIDOT’s Oct. 5 announcement.

In January, Rhode Island issued a preliminary report that a $3 toll could be charged at each of 14 location, with a $20 daily maximum. Possible toll locations could include six tollbooths on Interstate 95 between Hopkinton and Pawtucket and three on Interstate 295.

The tolls will be used to reconstruct or replace 34 bridges. By late November, RIDOT will issue a request for proposals and expects toll revenue to begin in 2018.

The Rhode Island Trucking Association has fought the measure hard over the past year. The association said Rhodeworks, the infrastructure plan signed into law Feb. 11, requires truckers’ tolls to fill too much of the funding gap carved by years of fiscal irresponsibility. In a statement issued Wednesday, the group called the DOT’s approval of the toll plan “self-serving.”

“Today’s news changes nothing and is nothing new to us,” RITA’s statement says. “The spineless political establishment of Rhode Island flanked by a labor driven Department of Transportation have combined their self-serving agendas to wipe away decades of corruption and malfeasance by scapegoating the trucking industry and imposing a veiled tax on the citizens of Rhode Island.  The trucking industry remains unified and resolute in its fight against this policy. We will use every resource and tactic available to us to win in the political, legal and commerce arenas. Once again, this does not bode well for a state that remains at the bottom of every economic indicator.”

Last fall, RITA proposed an alternative funding plan that included hiking diesel taxes and truck registration fees. This would generate $220 million over four years, the amount RhodeWorks allocates to repair 453 bridges outside of the 6/10 connector, the association said.

The project’s 34 bridges are listed at this link.

More information on proposed toll locations is available at this link. 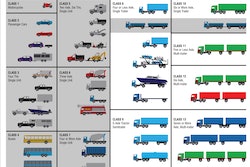 Anti-toll rally to be held in Rhode Island next week 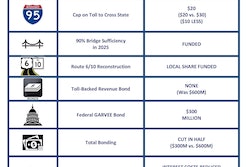