If you ever want a great landmark for your garage sale, park a big truck in the driveway. It was all we needed to include in the directions – no one missed it. It also provided an opportunity to engage with the general public and answer some questions about trucking.

It’s amazing the things people don’t know about trucking – and no, you can’t educate the unwilling, but you can catch a few here and there who are genuinely interested. I was really surprised at the number of people who showed up to buy art glass and ended up asking a hundred questions about the business of freight and transportation.

Most popular question of the day: “How much for the truck?”

My response — “Your everlasting soul” — was met with laughter nine times out of ten. The tenth person was a retired trucker who shook his head and said, “Boy you ain’t kiddin’ much.”

Laughter is a great way to get people to engage – we laughed a little and then the real questions started. “Why do so many trucks go so slow on the highway? It’s so aggravating to be stuck behind two trucks going 60 on a 70 mph highway.” After explaining to them about trucks being governed, and the very real possibility of all trucks on the highways being mandated to do so, the overwhelming response was, “That doesn’t make any sense.” Bingo and bravo, general public. Get on our level and spread the word.

“How much is your insurance?” was an unexpectedly frequent question. I replied with, “Well, I used to have two kidneys…” And again, we laughed and I was able to segue into the very real world of how detrimental forcing an increase is to the owner-operator, and how it puts an even larger bull’s eye on trucks for the ambulance chasers. It’s really amazing how people respond when you give them real-life figures, instead of the death and destruction preached on television by the very same ambulance chasers who stand to benefit from the increases.

“Where do you go to the bathroom?” has always been a question I’ve found odd. I have absolutely no interest in where people use the bathroom, as long as it isn’t on the fuel island or parking lot of whatever truck stop we happen to be at. I think this may be what they’re getting at, and I hate the thought of not being able to tell them all truckers use toilets like decent people, so I evade blatant filthy lies and politely answer with, “There’s no bathroom in that particular model of truck. Some have them, like motor homes. We use truck stops and rest areas — when they’re open.”

Which gives me a perfect way to spread the word that tax-funded safe parking is closing at an alarming rate. Anyway, we need to work on that one, folks. Trucker bombs are a legacy this industry needs to leave behind, and I don’t mean in the parking lots.

We had a great turn out at the garage sale, we met a lot of neat people and we enjoyed talking to folks about the industry. We sold a lot of stuff, gave a lot of stuff away, and basically accomplished the mission of getting rid of things, we even got the old pickup inside the garage. The other side is still completely full of things we can’t live without, but small progress is better than none at all. I think that’s probably a good way to approach anything, including advocacy. 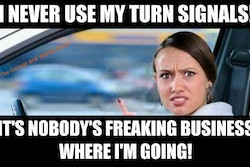