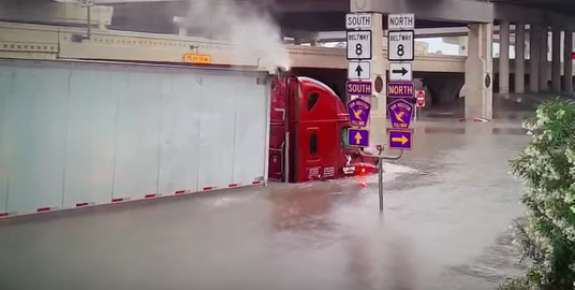 This truck plowed through the flood waters and made it through unscathed.

A truck driver was one of at least five people who died during the historic rainfall that flooded much of the Houston metropolitan area Sunday, April 17 and Monday, April 18.

The Houston Chronicle reported Monday a man was seen driving his tractor-trailer into high water Monday on West Hardy Road and the Beltway. The newspaper’s report added, “… a medical condition may have been involved.”

The identity of the truck driver was revealed by the Harris County Medical Examiner Tuesday as 60-year-old Pedro Rascon Morales. No hometown nor company for which Morales drove has been released.

According to The Weather Channel, citizens rescued semi truck driver Ron Bumpus from his rig after he drove into floodwaters near Brookshire, Texas.

Authorities say the recent rains were the worst since Tropical Storm Allison in 2001. As much as 20 inches of rain fell during the storm. Texas Gov. Greg Abbott declared a state of emergency as rivers and streams in the area continue to rise.

Reports say more than 1,200 people had to be rescued from flood waters, which dumped more than 240 billion gallons of water on Houston and surrounding areas in 24 hours.

An unrelated video below shows an 18-wheeler making it through the flood waters.