A total of 53 fireworks haulers have been granted hours of service exemptions for the Independence Day period through 2020.

The American Pyrotechnics Association’s 51 members, along with Illumination Fireworks and ACE Pyro, have been granted the exemptions from the 14-hour on-duty HOS rules.

The exemption allows the companies to extend the 14-hour on-duty window by excluding mid-period off-duty or sleeper-berth time of any length. However, drivers for the temporarily-exempted companies will not be allowed to drive after accumulating a total of 14 hours on-duty time, following 10 consecutive hours off duty, and will continue to be subject to the 11-hour driving limit and the 60- and 70-hour weekly on-duty limits.

In their exemption requests, the companies state that adhering to normal hours of service rules “would impose a substantial economic hardship on numerous cities, towns and municipalities,” as well as the companies involved. The exemption requests state the trucking companies would have to hire a second driver for most trips, which would increase the cost of the fireworks shows. 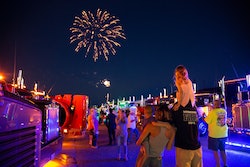 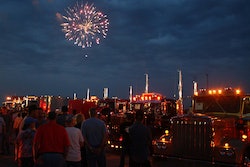