After introducing its electric drivetrain concept in July, Daimler continued the project with the introduction of the Urban eTruck, an all-new electric truck concept for short-radius, zero-emissions goods distribution.

The eTruck has a 200-km range, or approximately 125 miles, on a single charge and has payload capacity up to 12.8 tons. According to Sven Ennerst, Daimler’s head of project engineering, the eTruck’s lithium ion batteries can recharge within two hours.

“By 2050, cities will be home to more than 70 percent of the world’s population, and more urban transportation is required – for goods and for people,” said Dr. Wolfgang Bernhard, head of Daimler Trucks & Buses. “This creates challenges regarding emissions, noise, infrastructure and congestion. We are developing vehicles of a completely new kind.”

The eTruck takes design cues from the Mercedes-Benz Antos cabover, but the electric drive eliminates the need for a conventional air inlet, which is replaced by a LED-backlit black panel grille capable of displaying battery charge status, truck operating status and more.

Daimler also introduced the Mercedes-Benz Future Bus and announced its plans for an all-electric bus by 2018. See a full report of Daimler’s IAA event at Overdrive sister site CCJ here. 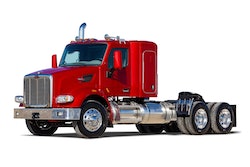 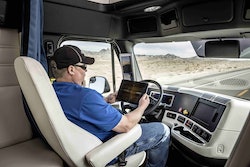