On Thursday, Nov. 10, at 6:30 p.m., a new documentary film about the nation’s deteriorating interstate highways and the truckers who spent large portions of their lives on them will be unveiled to a trucking-industry audience at a screening being held at the Minnesota History Center’s 3M Auditorium on Thursday, Nov. 10, at 6:30 p.m. The one-hour film — watch the trailer above — is called “Be Prepared to Stop” and is sponsored by Midwest-based trucking-insurance agency Truck Writers.

“In November, voters across the country will cast ballots on transportation investments in their communities,” Congressman Earl Blumenauer (D-Ore.) said at a recent invitation-only screening held at the U.S. Capitol Visitor Center Theater in Washington, D.C. “This documentary provides a needed call to action that Congress should heed, as it has failed to provide sustainable funding to rebuild and renew America.”

Los Angeles-based filmmakers Jennifer Clymer and Marijane Miller, who worked on the project, will be in attendance at Truck Writers’ Nov. 10 screening, which will be followed by a Q&A with Clymer and Miller.

“All films need to be entertaining. A good documentary needs to be informative,” Clymer says. “We knew a documentary about a less-than-sexy topic such as infrastructure would have to be both if we were going to reach a general audience We’ve shared this film with a few preview audiences, and just like tonight I always enjoy hearing the laughs in the right spots and the quiet when you know people are really listening. And I love it when people say to me two days later, ‘I’m still thinking about the film. I even drive differently now around big trucks.’”

The film builds on interviews with a host of transportation stakeholders, including numerous drivers and Owner-Operator Independent Drivers Association Executive Vice President Todd Spencer, among others. The interviews are wrapped around the family story of Steve Williams, representing his family’s third generation in the industry today as the Chairman and CEO of Little Rock, Ark.-based Maverick USA.

“My company has spent tens of millions of dollars on safety technology over the years to help ensure that our drivers make it home to their families while delivering the ‘quality of life’ to which Americans have grown accustomed,” Williams says “Unfortunately, our industry and our infrastructure have been taken for granted. It’s already too late for too many. It is time for real action.”

That action could come if the general public understood the extent of the infrastructure problem, Williams says in the film. “Our only hope is for the American public to come to grips with the reality … and to be pissed about it.”

Clymer notes that discussions to distribute the film nationally are under way. The Nov. 10 event will be the first screening in Minnesota.

If you’ll be in St. Paul November 10, to register for the free screening contact Mackenzie Sullivan, Brand Manager of Truck Writers, Inc., via (763) 785-0500 or register at this link.

More information about the film can be found at BePreparedtoStop.org. 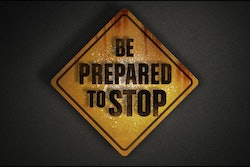