Overdrive Staff
Dec 9, 2016
Buchs checks in on the load board during the two-hour unload at the tail end of the run. He was planning then not the next load, which he’s pick up early the next morning, but looking farther down the line to the one after that.

“Since the end of the third quarter, we have seen signs that we may be reaching the end of the poor inventory cycle that has driven a lot of the weakness in the freight economy, so we may see turnover rates rebound in the months to come,” he says.

The turnover rate at smaller truckload fleets, those with less than $30 million in annual revenue, rose one point to 80 percent. Turnover at less-than-truckload carriers fell three points to 9 percent.

“Despite the falling turnover rate, carriers continue to report difficulty finding well-qualified drivers, a problem that will not only persist, but which will get worse as the freight economy improves,” Costello said. 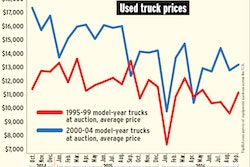