Approximately 1,900 bridges along the United States’ interstate system are deemed structurally deficient, a fraction of the nearly 56,000 bridges across the U.S. with the same designation, according to a report released by the American Road and Transportation Builders Association (ARTBA).

The organization’s analysis of U.S. Department of Transportation data on bridges in 2016 found that the country’s 55,710 structurally deficient bridges are crossed more than 185 million times each day. The number of bridges in the report is down a half percent from 2015.

The average age of the nearly 56,000 structurally deficient bridges, according to ARTBA, is 67 years old, compared to just 39 years old for non-deficient bridges. Additionally, 41 percent of all bridges in the U.S. are at least 40 years old and have had no major reconstruction work done to them.

During regular inspections of bridge decks and support structures, bridges are rated on a scale of zero to nine, with nine being “excellent” condition, ARTBA says. A bridge is classified as structurally deficient and in need of repair if it scores a four or below. 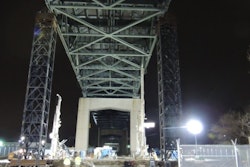