Load board stalwarts DAT and Truckstop.com have both in the last year updated mobile access points to their freight universes. At its Connected 2016 user conference in November, Truckstop.com unveiled the Truckstop.com Mobile app (Android, iPhone) with built-in load-tracking functionality brokers could use to enhance movement visibility, among other updates.

The new DAT Load Boards for Truckers app (Android) adds to the mobile-optimized web versions of DAT’s boards accessible in mobile browsers. DAT subscribers can perform a variety of searches there, minus some of the more refined functionality available at the various subscription tiers. It’s all about moving the boards more fully “in the cab” says DAT’s Ken Harper, “to make the whole freight exchange a lot easier. Sixty to 70 percent of our customers come to our website using a phone or tablet.” The company’s trip-planning app DAT Trucker likewise continues to offer a “nearby loads” quick search based on the operator’s location.

A newer player in the load-board space has taken a mobile-specific approach from its beginnings in 2015. Trucker Path’s Truckloads app, after debuting around the time of the Great American Trucking Show that year, has in a very short time become what independent owner-operator Ivan Sandul views as perhaps the best mobile-optimized board he’s seen. Sandul pull a flatbed with a conestoga kit behind a 2009 Freightliner Cascadia, based in Sacramento,  Calif., but running all over the country.

He’s a longtime user of both the free Truckloads app, since it was in beta form, as well as Trucker Path’s baseline trip-planner app.

There’s a simplicity to its design that he appreciates, compared to its competitors on the application side. While Truckloads doesn’t yet have quite the universe of spot market freight of DAT and Truckstop.com (both of which Sandul utilizes), things have gotten better over time in that department. In some ways, Sandul says, “things are all starting to even out – they’ve really hit something of a milestone on that.”

While it’s much easier for a tech company to look around and say, “What should I build next?”, Sandul suggests Truckloads’ improvement could be the best bet the company could make in the near term.

In addition to pulling loads from third-party sources, late last year company founder Ivan Tsybaev noted “more than 600 companies posting” loads directly in Truckloads, to the tune of a total 100,000 truckloads a day in the platform.

Trucker Path is making its money via a new, virtually paperless factoring platform, InstaPay, which Sandul says he’d used a good bit since it was introduced in recent times. As an early participant, he received a half a percentage point discount on the cut Trucker Path takes. Swiftness of payment, as with other factoring services, is one benefit he sees. “I can take a picture of the proof of delivery information, email it through the Truckloads app, and the next morning I should have the money in my account.” 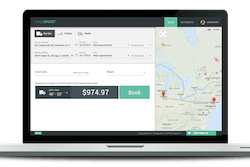 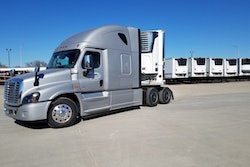