Jay “Big Belly” Chase is definitely not your run-of-the-mill trucker. As a matter of fact, during his 20-plus years in the trucking industry, he tried hauling for the aggregate “mill,” but found doing the same thing, day after day, wasn’t for him at all.

Chase says he began his trucking career backwards. Working first as a dispatcher, then planner, for a fleet operation, Jay gained insight a lot of drivers don’t have. He realized the drivers were making significantly more money than he was, and didn’t have someone screaming in their face all day long. He went to CDL school and began a career behind the wheel he says, so far, has taken him roughly enough miles to make six or seven round trips to the moon.

He worked for several different companies, and settled in at Smith Transport for what he hopes to be the rest of his driving years. His New England accent really accentuates the quote he gave me about Smith. “I’m a Homah with Smith, they don’t botha me out heyah. I can do my job and be ‘Big Belly’ on social media, and nobody cares.”

(Side note: I kinda wish I had recorded this conversation — my Georgia cracker accent and his New England clam chowdah twang actually came together pretty well. It was fun to hear how different we sounded saying the same things.)

Jay has a five-year plan to be out of the freight hauling business and on to something else, like real estate. He’d like to be selling homes and dreams by the time he’s 50. In the meantime, he’s developed what he calls his “defense mechanism” to hard days and nights away from his wife, who doesn’t happen to think his alter-ego, Big Belly, is all that amusing.

“I do the videos and posts to entertain myself, more than anything,” he says. “My phone has an app I can make a movie with, and I think that’s pretty neat.” He adds it makes the creative process even more satisfying when people have positive responses to his posts. Or any response, for that matter. Getting people to engage and think a little are definitely reasons behind the time he spends being “Big Belly.”

The wicked fun going on over in Big Belly land ranges from completely inappropriate and hilarious to slightly inappropriate and thought-provoking. Hell, he’s even done a cooking video, and I think he managed to keep it all G-rated. His humor reflects the same love/hate relationship a lot of us have with the industry. “I’ve seen things and met people I woulda nevah met without truckin’,” he says. “I can honestly say I’ve got friends in all 48 states, and that’s cool.” On the other hand, “It’s a haaad job, it can be a pissah.”

Indeed it can, friend.

We look forward to meeting up with Big Belly and all our other trucking family at MATS, and hope to see y’all there, too. 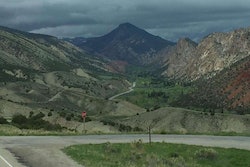 Five Apps for That: Keeping tabs on personal finance