With several companies jockeying to bring autonomous trucks to market, industry stakeholders this week stressed to a panel of top officers from the Federal Motor Carrier Safety Administration the importance of manned control for tractor-trailers, at least for the foreseeable future. Commenters at the public FMCSA meeting also noted the potential for hours of service reform relative to autonomous vehicle tech, among other issues.

The agency’s listening session on autonomous vehicles was held at the annual Commercial Vehicle Safety Alliance workshop Monday. Attendees of the workshop and others from the public offered commentary on several issues relative to developing an appropriate regulatory framework for the operation of highly automated commercial motor vehicles with advanced driver-assist systems.

During the meeting, commenters shared a variety of information related to the design, development, testing and deployment of such vehicles. Special regulatory requirements as technology moves into the arena of near-full autonomy — in the areas of driver and technician credentialing, hours of service, inspection, repair and maintenance — were on the table for input.

“Vehicle manufacturers and technology developers continue to design, test and develop driver-assistance systems,” noted Deputy Administrator Daphne Jefferson in opening remarks. “We encourage these developments and applaud the innovators,” regarding the technology broadly as an opportunity to enhance safety. The primary focus of the session, she added, was to ensure that related “regulations provide appropriate standards for safe operation. … Our goal is not to impede progress, but for us as regulators to try to run alongside development …. [continuing to be the] voice of safety in the room.”

More than one commenter emphasized the need for a human to remain in control of the vehicle. Trucker Bryan Spoon, a board member of the Owner-Operator Independent Drivers Association, illustrated such with an extreme example of the kinds of safety decisions operators make on the road, invoking a hypothetical near-crash where the choices are to “hit this brick wall” and destroy the truck or “deviate and hit kids in a crosswalk,” Spoon said. “What choice does our automated vehicle make?” Destroy itself or “a group of schoolchildren in a crosswalk?”

Such thorny questions around the implications of robotics in heavy-vehicle technology were, however, by and large on the backburner throughout the session — practical matters emerged in two big areas of discussion: hours of service and the CDL.

Hours of service
Those believing FMCSA ought to incentivize adoption/development of highly automated driver-assist technology insisted there has to be a return on investment — the biggest opportunity for such appeared to be in the hours of service regulations.

Consultant Richard Bishop noted the “interesting situation” for tech developers today, given a seeming lack of return-on-investment potential for carriers who might choose to take up Level 3 and higher automated systems (Level 5 is considered near fully automated). “There would be more private investment in Level 3 systems if hours of service were [such that] you could get more of a return on investment,” Bishop said. Of course, he also noted, “hours is a very contentious place” for regulators to go, and one where owner-operators experience many of their biggest business headaches.

Bishop wondered about the pathway for FMCSA to “get to a place [in the regulations] where that driver can get into the cab of the automated vehicle and he’s on-duty not driving. I think the tech will get us there.” Bishop went on to offer the example of long waits in line by dray drivers at ports he’d seen, where two hours of waiting isn’t uncommon and with the truck moving no faster than 5 mph. In a highly-automated situation, that might even make for an opportunity to get into the bunk for sleeper-line time.

Fred Kovall of Anderson Trucking Service wondered “if the driver has to be in the truck and has to have some control over it, how many hours in a row can you pay attention doing nothing” in a highly-automated-vehicle environment? A recent study presented at the Managing Fatigue conference in March suggested such automated driving may be more fatigue-inducing than active control.

“Right now,” Kovall added, drivers can drive “for 11 hours – you want to extend beyond that? … My biggest concern is how do we keep them occupied, busy and awake.” (Kovall saw a remote-control drone-type situation in the future for any truly “driverless” vehicle.)

Tom Balzer of the Ohio Trucking Association noted that hours of service as an issue “hasn’t been settled in 12 years and will remain so for the next 25 because of the changes in technology. … You probably won’t find a distinct long-term plan to deal with hours.”

Sean Garney, representing the American Trucking Associations, concurred to an extent. “We talk about return-on-investment in the trucking industry, removing the driver to create additional efficiencies,” but “there are efficiencies to be gained with the driver still on the truck.” He emphasized that the technology is a long way from coming to full flower and though the conversation may be premature, the “hours of service piece is one of the more interesting conversations.”

The CDL
Starkly divergent points of view around the need for special credentialing for autonomous vehicle operation came from several commenters.

Some states have been approaching the issue of endorsements differently as highly automated light- and heavy-duty vehicles have been tested. FMCSA “does not require a special [CDL] endorsement for autonomous operation” currently, said Jack Van Steenburg, the agency’s Chief Safety Officer.

Former driver and current MCO Transport Safety Director Danny Hefner illustrated the need for special skills, noting fears around safety and autonomous vehicles, particularly in the event of one of the most precarious of highway emergencies for operators — a steer-tire blowout. “Will the truck be able to maintain its lane” without immediate driver control? he asked. “That kind of thing can lead to several highway deaths.” Hefner concluded that “drivers operating these vehicles should have a special endorsement,” something that said they’d “been specifically trained and can meet the requirements.”

Tom Foster of the Washington State Patrol, too, picked up a tire-related failure situation as a means of illustrating what he saw as the long-term necessity of active human involvement in the operation of highly automated commercial vehicles. “What does the citizen do when a retread comes off an breaks a windshield? As law enforcement, how do we intervene and stop the vehicle? I think having the driver in the seat is important. We’ve got great drivers in this country and I don’t want to ever minimize the importance of those people.”

Ognen Stojanovski of Uber/Otto, the company behind last fall’s Budweiser partially automated beer run last year, disagreed with the prevailing sentiment about special CDL credentialing via an endorsement or other mechanism.

Moving farther along — if automated vehicles remove the human — “FMCSA may need new regulations,” he said. Nearing the end of the transition period, ultimately, “If it requires just the push of a button” to engage an automated system, “it may be appropriate to allow the driver to record time spent in the sleeper” on the road as such. “FMCSA should recognize the distinction between [automated vehicles] that require the driver” to be engaged, “and those that don’t.” 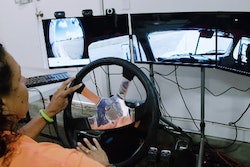