The report says DOT needs to make CSA’s Safety Measurement System more fair and accurate in assessing motor carriers’ safety risk, and that data used to create the rankings is in need of “immediate attention.”

Key recommendations from the report, made public Tuesday, include:

NAS will provide the roughly 130-page report, “Improving Motor Carrier Safety Measurement,” to FMCSA and to Congress, which called for the report in the 2015 FAST Act highway bill. The act also pulled the SMS’ BASIC percentile rankings from public view.

The law stipulated that the NAS must issue recommendations on how FMCSA can fix the data and methodology issues that have plagued CSA since its 2011 onset — and that FMCSA adopt the recommendations — before the SMS can be made public again.

It’s unclear yet how the agency intends to act on the report’s recommendations or the timeline on which it plans to adopt any CSA reforms. FMCSA confirmed it has received the report and says it will issue a response to Congress within the 120 days allotted by the FAST Act. An agency spokesperson says it is “reviewing the findings.”

The agency has already undertaken an effort to improve crash reporting through its Post-Accident Report Review Subcommittee of its Motor Carrier Safety Advisory Committee. That group is tasked with making recommendations to improve crash-report utility and standardization.

The NAS report on CSA and its underlying data reaches an oft-heard conclusion: While the premise behind CSA’s SMS is sound, FMCSA’s execution of the program was flawed from the ground up. CSA relies on in some ways inadequate data, NAS researchers conclude, which is then funneled into a scoring system that has not been “sufficiently empirically validated.”

Findings in other ways reiterate conclusions reached by Overdrive’s multi-year CSA’s Data Trail series, one of many analyses of CSA’s flaws and their impact on carriers. The report notes the chief criticisms of the CSA program: Some BASICs lack correlation with crash risk, data insufficiency, use of relative rankings, use of non-fault or nonpreventable crashes, state variations in inspections and violations, lack of consistency in violation coding, a lack of transparency of the SMS algorithm and the public availability of SMS rankings.

“Conceptually, SMS is structured reasonably,” the NAS report concludes.  However, researchers add, “too much of the detail is ad hoc,” referring to FMCSA’s execution of the program.

The report doesn’t go into depth about its recommendations for a new statistical model to replace the SMS model, but it touts the IRT model as one that has been proven to work in fields such as health care and education to achieve outcomes similar to those sought by the SMS. IRT models are used in health care to assess the quality of care given to patients and in education to assess teachers’ performance. In both fields, IRT models are used to target poor performers for intervention, just as FMCSA does with the SMS rankings.

NAS’ principal recommendation is that FMCSA develop an IRT model over the next two years and then implement it in place of the SMS “if it [demonstrates] to perform well in identifying motor carriers for alerts.” Transitioning to an IRT model, the study’s authors believe, would in part help soothe some of these problems. It would make violation weighting more data-focused (less reliant on severity weights), provide better transparency, account for holes in data and more.

FMCSA needs to build a more “user-friendly version” of the Motor Carrier Management Information System (the data well that feeds CSA) and make its scoring methodology more accessible, NAS says. Such changes would make it easier for carriers to understand how they’re being scored and learn how to improve their scores and, hence, their safety practices.

Before going public with a revamped SMS, the agency should also further analyze the ramifications of publicly displaying the SMS rankings. Shippers and brokers have to varying degrees used the rankings to deny carriers business, while insurers in some cases used the system to charge higher premiums.

Researchers also recommend FMCSA find a way to implement an absolute scoring metric into the SMS algorithm to select carriers for intervention, rather than relying solely on relative rankings. Relative ratings can be a moving target for carriers trying to boost their safety culture.

NAS, established by Congress in 1863 as a private institution, intends to provide nonpartisan and objective research to lawmakers and regulators to help steer policy decisions. Congress funneled the funding for the new study through FMCSA. 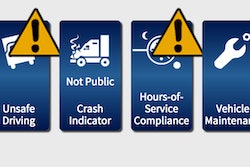 Truckers can participate in meeting Friday on future of CSA