The Commercial Vehicle Safety Alliance announced Herschel Evans of the trucking company Holland as the winner of the 2018 International Driver Excellence Award (IDEA). Evans has driven more than 3 million miles over 30 years, 25 of those years with Holland. 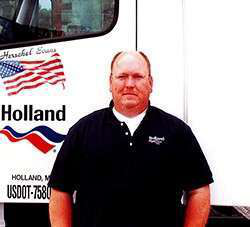 “After my company nominated me, I read the impressive bios of the previous winners and I did not think I belonged in that group,” said Evans. “I feel extremely honored to be selected.”

Launched in 2015, the IDEA honor recognizes commercial motor vehicle drivers who distinguish themselves conspicuously and beyond the normal call of duty through the achievement of safe operation and compliance carried out with evident distinction for an extended period of time.

Like many commercial motor vehicle drivers, Evans truly loves what he does. “It is never the same day twice,” he said. “There is nothing boring about driving for a living. You get to see the inner workings of many different places. All of the places that make your community run are kept running by us drivers delivering what they need. Every day has a sense of doing something that is necessary.”

“Herschel is an exceptional model for what a professional driver should be,” said Holland President Scott Ware, who nominated Evans for the award. “His unquenchable desire for great safety and his need to share his safety message make him a key participant in our organization’s safety efforts. He is committed to protecting himself and all those who share the road with him.”

In 2013, Evans became the first person from Holland to be selected by the American Trucking Associations (ATA) for the honor of representing the trucking community as an America’s Road Team Captain. “The opportunities and experience that I’ve gained have been immeasurable,” said Evans. “Being part of this group of professionals is hard to describe. Being mentored by the veteran Captains and now passing my knowledge on to the new Captains, I believe, has a massive impact on our industry.”

CVSA’s IDEA isn’t the only award Evans has received throughout his career. In 2012, he was honored with the Destination Green Environmental Excellence Award for his efforts toward environmental sustainability. He was also honored by ATA in 2017 with the Mike Russell Trucking Image Award, an award that recognizes individuals who are committed to promoting the advancement of the trucking industry’s positive message.

Evans’ devotion to philanthropy has spanned his professional career. Evans is the driving force behind the Safety Drive for a Cure Truck Safety and Skills Competition benefiting the Pediatric Brain Tumor Foundation. Hundreds of drivers travel from across the country to compete in the Safety Drive for a Cure, improving their safety skills while supporting advocacy and service.

Evans has also donated his time and services to the Convoy of Care, helping to deliver critical supplies to families affected by major natural disasters, such as the flooding in Baton Rouge, Louisiana, in August 2016 and tornadoes in southern Georgia in February 2017 and flooding in Houston, Texas, in August 2017.

With decades of driving experience and millions of crash-free miles driven safely on the road, Evans is an ambassador too less-experienced drivers on issues of safety. “When I talk to young drivers,” he says, “I always tell them that space and time are your two best friends on the road. You need space to maneuver and time to decide and react. Lots of crashes could be prevented just by drivers giving themselves more space and time.

“One day at a time. One mile at a time. You can never be in such a hurry that you take chances. Taking chances has such a small benefit for the enormous risk. It just simply isn’t worth it.” 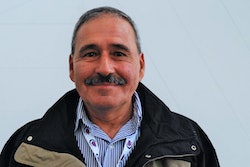