Cargo theft experts are warning truck drivers and fleets about the increased risk of theft next week during the Independence Day holiday.

Because July 4 falls on a Wednesday this year, cargo theft recording firm SensiGuard says there is a chance that shippers and receivers will also be closed on Tuesday, July 3, and/or Thursday, July 5.

The firm says organized cargo theft rings will be looking for unattended loads during the holiday period. During the July 4 holiday periods between 2013 and 2017, SensiGuard recorded more than three thefts per day with an average loss value of $207,570 – a theft rate 38 percent higher and average loss value 20 percent higher than thefts throughout the rest of the year.

Scott Cornell, transportation business lead and crime and theft specialist for Travelers Insurance, says the majority of cargo thefts that occur during holiday periods happen on the first day a load is parked because it gives the thieves a longer timeframe to go unnoticed.

“Dispatch teams are generally smaller on weekends and during holidays, so there are fewer people with eyes on cargo,” he adds.

With the upcoming holiday is in the middle of the week, Cornell says he hopes theft activity will be reduced.

“Unless people are taking Monday and Tuesday or Thursday and Friday off as well, we should see lower numbers than if the holiday fell on a weekend,” Cornell says. “It’s hard to predict with it being in the dead center of the week. We suggest always practicing the same diligence as every other holiday period.”

Drivers hauling food and beverage commodities should consider taking extra precautions as those have been the most-stolen commodities for the last eight years, Cornell says.

“Thieves target what they know they can sell, and with food and beverages, the evidence disappears quickly because it is consumed,” he adds. “These items aren’t as traceable as electronics. There’s no serial number on a pistachio.”

Cornell says Travelers preaches a three-layered approach to its customers when it comes to cargo theft. The first layer is process and procedures, which is at no cost to the drivers and carriers. He says this largely entails having a policy in place that before picking up a load, the driver will have taken his break, gotten fuel and taken care of any personal needs so he or she can drive at least 200 miles without stopping.

“This is a good procedure because cargo thieves will sit and surveil outside distribution centers hoping the driver stops before leaving town,” Cornell says. “Then they take advantage and steal the load and disappear. It’s a basic procedure, but it’s effective.”

Other procedures drivers can practice include parking in well-lit areas and not staging loads in unsecured yards. Cornell suggests not staging loads at all, but if it’s required, do so in a well-secured, well-lit lot where the load won’t be left unattended.

The second layer to prevent theft is the use of hard-locking devices, such as high-security rear door locks, landing gear locks and more. These are relatively inexpensive, but Cornell warns you often get what you pay for.

The third layer is technology such as covert tracking devices that are installed in a trailer or loaded and hidden in the cargo. Placing the devices in the cargo is the most effective way to prevent theft because many times, thieves will unload the cargo from a trailer onto another trailer to prevent tracking.

“The cost of tracking technology has gone down,” Cornell says. “You can get covert tracking devices for anywhere from about $150 to $500, depending on what you want. However, if a smaller carrier can’t make the investment, everybody can do the process and procedures.” 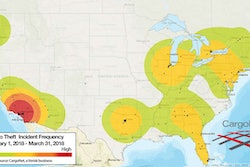 Cargo theft volume, values down so far in 2018 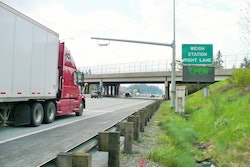