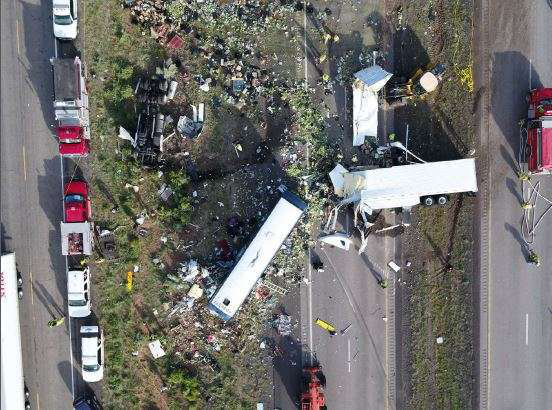 A tractor-trailer reportedly blew a steer tire along I-40 in New Mexico, causing it to cross the median and strike a Greyhound bus head-on, killing eight. (New Mexico State Police photo)

A crash involving a tractor-trailer and a Greyhound bus in New Mexico last week that left eight people dead appears to have been caused by a steer tire blowout on the truck.

According to a press release from New Mexico State Police, the truck “suffered driver side front tire failure when the tire tread separated from the case,” causing the 2017 Freightliner to cross the I-40 median and collide head-on with the bus. There were 47 passengers on the bus, along with the driver. The driver and seven passengers were killed and 25 were injured. The truck’s driver was treated with non-life-threatening injuries.

The National Transportation Safety Board is investigating the crash. According to a report from NBC News, both steer tires will be sent to Washington, D.C., for analysis to determine why there was a blowout. NTSB will also reportedly use the electronic logs from both the truck and bus during its investigation. A preliminary report from NTSB will likely be released in the coming days or weeks, but final reports generally take 1-2 years to complete.

New Mexico State Police says the truck was owned by Jag Transportation out of Fresno, California, and the driver was identified by local news station KRQE as 35-year-old Elisara Taito of California.

According to the Federal Motor Carrier Safety Administration’s Safety Measurement System, the 17-truck fleet has had two out-of-service violations related to tires in the last 12 months – one on May 7 in California for a “tire cut exposing ply and/or belt material,” and one on Nov. 6 in New Mexico for “flat tire or fabric exposed.”

Happening Today: NTSB investigators are on their way to the scene of a horrific crash on I-40 near Thoreau involving a semi and a Greyhound bus. 7 people were killed in the crash yesterday with dozens more injured. #Greyhound #NewMexicohttps://t.co/SUUdr5mVCr