According to numbers from the Commercial Vehicle Safety Alliance, officers pulled over or inspected 42,144 commercial vehicle drivers and issued 10,709 citations and 29,908 warnings during the week-long event held July 15-21. CVSA did not differentiate between truck and bus drivers in its numbers. By contrast, 71,187 passenger vehicles were pulled over, resulting in 46,696 citations and 57,999 warnings.

For commercial drivers, the top five citations issued were for violations of state and local laws (6,008 citations), speeding (1,908), failing to use a seat belt (1,169), failure to obey a traffic control device (754) and using a handheld phone (262). CVSA says only 17 commercial drivers were cited for operating their vehicle while ill or fatigued.

The Federal Motor Carrier Safety Administration also participated in the blitz by telling federal safety inspectors to focus on carriers with recent crash involvement and high percentiles in the driver-based BASIC CSA category. CVSA says data is still being collected, but as of Sept. 19, FMCSA completed 108 compliance investigations and cited more than 100 acute and critical violations.

Annual CVSA enforcement spree to focus on speeding next week 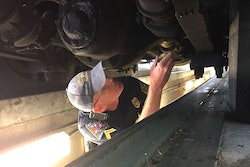