Retirement planning, Part 1: How owner-operators can transition to the slow lane

This is the first part in a three-part series on how owner-operators can work toward retirement. See the other two installments in the links below.

Most owner-operators aren’t ready to fully retire to a comfortable lifestyle by their late 60s. Here are key things to consider and ways to build savings – even if you’re starting late.

Americans tend not to save enough for retirement. Owner-operators are no different.

A poll of Overdrive readers, most of whom are owner-operators, shows that more than one in five report having nothing saved for retirement. When a general audience was asked the same question by gobankingrates.com, 14 percent fell in that category.

Those who make little progress in saving for retirement will be dependent on Social Security payments and, if available, any pension payout. In many cases, that won’t be enough to cover $46,000 a year, which the U.S. Bureau of Labor Statistics says is the average annual spending of adults over 65. 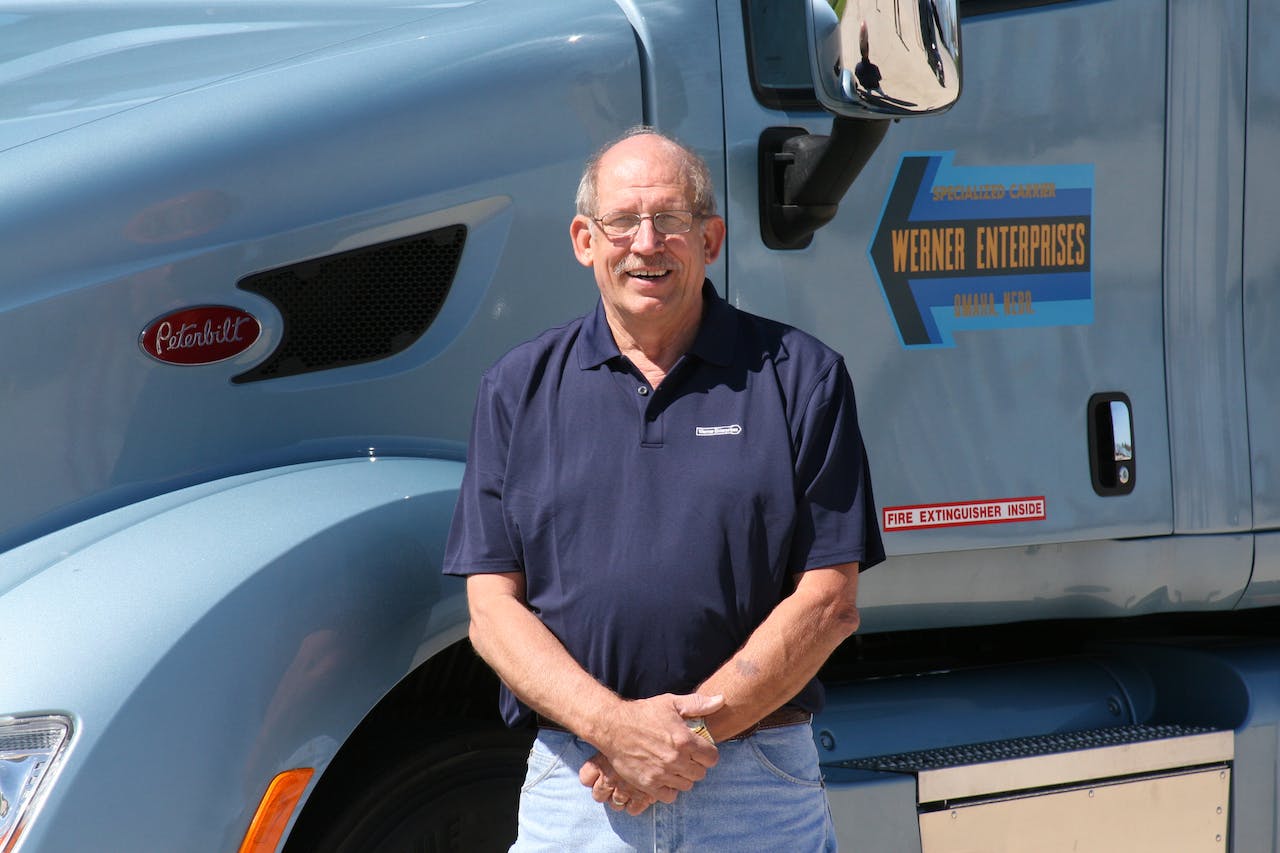 Glenn Stewart, 60, an independent based in Kentucky, says his 1995 Peterbilt 379 is paid off, but he doesn’t have much saved for retirement. He will probably start drawing Social Security before the full retirement age of 66.

Among the clients of Etruckertax, most of whom are owner-operators, about a third have an adequate retirement savings plan in place, says owner Dennis Bridges. “That’s high because we’ve sort of lovingly beat them over the head with it,” he says. Among the owner-operator population at large, those on track for a comfortable on-time retirement would be 10 percent or less, he estimates, based on calls to his office.

For many owner-operators, saving for retirement took a backseat to making ends meet, one of many challenges for the self-employed. Between lack of savings and a love of driving, many are willing to keep trucking beyond their mid-60s.

“I figure I’ll work till I can’t get up the side of the truck, and then it will be all over with,” says Glenn Stewart, 60, an independent based in Somerset, Kentucky. His 1995 Peterbilt 379 and Utility reefer are paid off, but he says he doesn’t have much saved and probably will start drawing Social Security before what the agency considers full retirement age, 66.

A prolonged driving career is a common solution to boosting skimpy retirement funds, and fits well those who love driving and would be bored staying home. But those who would like to come off the road – or for health reasons need to come off – should be aware of what to expect when that day comes.

The traditional wisdom has been that an individual should plan to live on about 70 percent of pre-retirement income during retirement. That’s still a reasonable goal, especially for those who have no big plans for travel, dining at fancy restaurants or other expensive pursuits. 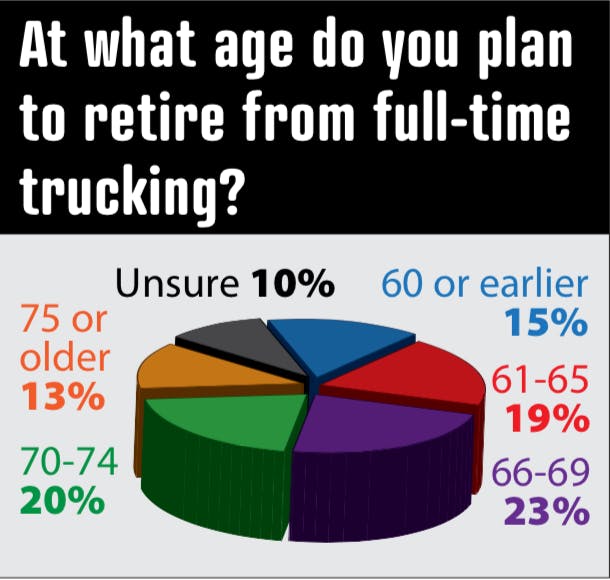 Bridges still uses 70 to 75 percent of income as a good target for his retiring owner-operator clients. That level should allow some travel and other luxuries above the bare basics, he says.

Those who have been diligent to save, have good health and would like to live it up more in retirement should consider higher levels. A study presented by two academics in the Wall Street Journal last year upped that 70 percent to 130 percent. That means that even a disciplined savings plan targeting 70 percent of income would have to be almost doubled to achieve the 130 percent.

“The 70%, in other words, is the conventional wisdom. And it’s wrong,” reported authors Dan Ariely and Aline Holzwarth. Their 130 percent target was derived from interviews with people about the specifics of how they want to spend their retirement days and their current savings plans.

Charles Endorf, 70, is among those aiming well above 70 percent. “I thought of this 20 years ago, that when I retire, I want to have basically the same income,” says Endorf, who’s been more disciplined than most drivers in saving for retirement. “I mean, who wants to cut their income?”

He’s worked 42 years for Werner Enterprises as an owner-operator or a company driver. Six years ago he moved to part-time driving. More recently he got away from driving and into an “ambassador” kind of role, “trying to be a motivational guy” with younger drivers. That includes “talking about retirement to them even though half of them aren’t ready yet.”

Endorf has no retirement date set. “I don’t want to work the rest of my life, but I’m the type of guy that can’t sit still.” In the meantime, and whenever he does retire, he’s well set: paychecks for him and his wife, who also works part time; Social Security checks he and his wife already are drawing; an Individual Retirement Account from his savings when he was an owner-operator; and 401(k) savings as an employee.

Endorf adds that as of this Jan. 1, Werner employees can designate as much as 6 percent of their pay to be eligible for 50 percent company matching in a 401(k) account. 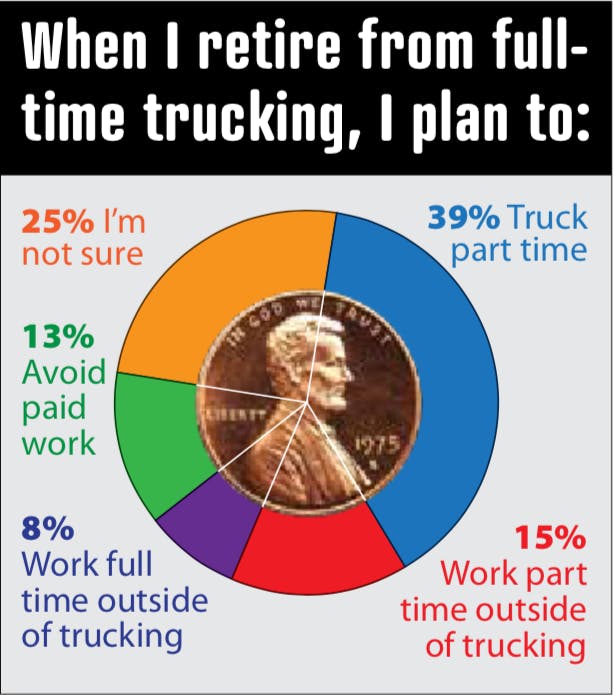 As important as your anticipated spending level is, it’s not one of the first retirement questions Bridges gets from owner-operators. The most common is: Where do I start? The next is closely related: Where do I get money to save for retirement?

The answer to the first is simpler than many owner-operators realize. One common practice is to get advice on a safe mutual fund family, where investment choices of varying risk levels are available and already diversified throughout the fund’s assets. Then set up an automatic deposit into the fund, usually drawn from your checking account, and your retirement plan is on autopilot. It’s ideal for those who lack the discipline to make frequent deposits manually.

Your accountant or other financial adviser can help you determine the right type of retirement tax entity to use. An IRA, individual 401(k) and other retirement options have similar tax advantages.

The second question – how to find the extra money – is much more difficult.

Financial planners often advise putting aside 10 to 15 percent of earnings for retirement. Few owner-operators do this throughout their careers, so it’s no surprise many find themselves behind as they near their 50s and 60s.

Owner-operators, generally an older segment of the workforce and strapped with the challenges of turning a good profit in a highly regulated business with high overhead costs, often are looking at a late start for catching up on retirement. The following choices are ways to cut costs or increase earnings to free up money for a retirement plan:

• Work longer. Besides the immediate influx of continuing pay, it makes it easier to postpone tapping into your Social Security account or other retirement funds, such as an IRA or a 401(k). If you want to keep working but really need to slow down, move to part-time work, whether it’s driving or something else.

• Allocate part of each pay raise to savings. If you arrange to save, say, half the amount of any rate hike, you still get a raise and a savings boost.

• Relocate somewhere with a low cost of living. This makes sense only if you’re in an area of high living costs now and you have no strong ties to keep you tethered there.

• Live out of your truck. It’s the ultimate low cost of living, with the potential to save thousands of dollars a year. The evolution of technology makes it possible to handle all your finances and other matters online, and with no home to maintain, there are fewer bills to keep up with. You’ll still need a residential address of a relative or someone else as a matter of record to be able to claim per diem expenses.

• Maximize a tax-deferred saving option. As a self-employed person, you have options to move up to 20 percent of your net income into retirement savings, Bridges advises. Tax-deferred investment options, such as an individual 401(k) or a SEP, will reduce your immediate tax bill. When you do withdraw the funds in retirement, you’ll likely be in a lower tax bracket.

• As you get close to retiring, if your truck needs to be replaced but has little value, consider finishing your career as a company driver. You don’t want to risk too much uncertainty over sudden major maintenance bills or a weak truck market right at the time you hope to retire. Better to start your new phase with no debt hanging over your shoulder. 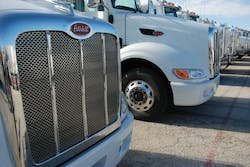 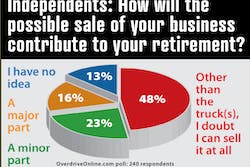 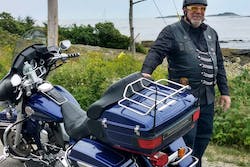 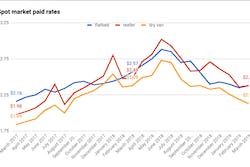