Life as a truck driver in America in 2020 isn’t easy, and the job can present a number of problems drivers need help sorting out.

A cadre of veteran truckers familiar with life on the road and the troubles that can crop up hope to provide assistance for those problems. They also hope to enlist other truckers in their efforts.

Truckers Emergency Assistance Responders (T.E.A.R.) is a new non-profit organization with the goal of helping out truckers in need. The fledgling group’s slogan is, “We step up when they step back,” and seeks to help drivers who need “assistance due to carrier abandonment, wage theft, carrier retaliation, accident, weather, illness or injury,” according to a statement on its Facebook page and two of the three founders. 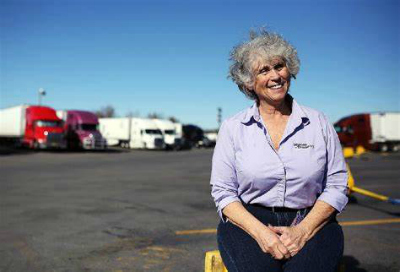 Idella Hansen is one of three founders of the new Truckers Emergency Assistance Responders group, along with Dominic Oliveira and Desiree Wood. The group seeks to fill in the gaps that other trucker assistance groups don’t cover, including assistance due to carrier abandonment, wage theft, carrier retaliation, accident, weather, illness or injury.

Idella Hansen and Dominic Oliveira agree that the group they and Desiree Wood founded late last year is meant to be a helping hand to drivers in need. While there are other existing groups helping truckers — among them the St. Christopher Truckers Relief Fund, Meals for 18 Wheels, Truckers Final Mile — Hansen and Oliveira said T.E.A.R. is meant to fill some gaps.

It seeks to be a referral resource truckers can use to help get an answer or assistance for an immediate problem. That may mean connecting a driver in need to another driver or service that can help, provide an answer to a pressing question for a rookie driver or even provide some modest financial assistance.

“There was a definite need to help some people get home, get to the next job, just enough money to feed them (and) house them for the night,” Oliveira said. “Like I said, there are some groups that do that, but one doesn’t cover this one, this one doesn’t cover medical, and the other one doesn’t do emergency medical. So we wanted to fill the gap. We’d been talking about this for a while and the opportunity came up to do that. We’re just filling the gaps.”

Oliveira, Hansen and Wood know all about the problems that can arise for truckers. Hansen has spent 50 of her 70 years as a driver and has been a volunteer for numerous trucker-related charities and organizations. Oliveira has been on the road since 2013 and has his name attached to a precedent-setting federal lawsuit that was ruled on by the U.S. Supreme Court. Wood is the founder of Real Women in Trucking and is an advocate for women in the industry, new drivers and proper training.

Because of her long career and standing in the industry, Hansen said she often fields questions from drivers seeking information or assistance. Those calls helped inspire the creation of T.E.A.R., she said.

“I get a lot of the phone calls because let’s face it, my name’s on the truck stop,” said Hansen, whose name truly is attached in big letters to the TA-Petro in North Little Rock, Arkansas. “They see me, you know, and I don’t make my phone number private. I’m out here to help. That’s all I’ve ever wanted to do was to help. And, sometimes it was just a bit of encouragement. It was a sentence. It was a website, it was another person. But other times it was money and you can only do so much yourself.”

The hope for the group now is that truckers in a bind can reach out to T.E.A.R. and get the helping hand they need. Operating under the umbrella of the Truckers Assistance Fund created and overseen by Allen and Donna Smith, T.E.A.R. is recruiting volunteers who will be available to answer questions, make referrals and make phone calls on behalf of drivers.