Re-positioning for disaster ahead of Laura’s landfall: The spot market in the last week 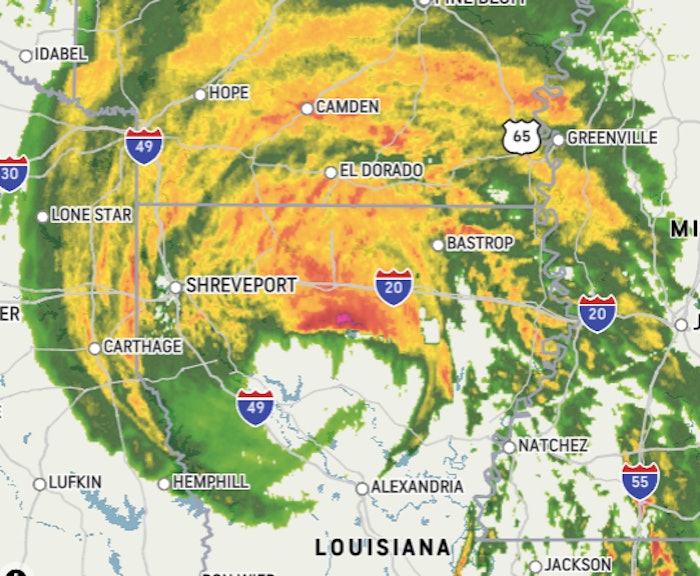 Spot truckload freight activity jumped last week as shippers and logistics providers repositioned freight as two major storms were forecast to land along the Gulf Coast, Laura and Marco. Hurricane Laura has made landfall within the last 24 hours and is forecast to continue north through Louisiana and surrounding states before turning east at Tennessee/Kentucky.

The number of loads posted on the DAT One load board network increased 9% in the week ending Aug. 23, and truck posts ticked up 2% compared to the previous week, pushing national average spot rates to their highest levels since July 2018.

These rates are rolling averages for the month and include a fuel surcharge.

Fuel prices: Hurricane Laura landed on the northwestern Gulf Coast along “Gasoline Alley,” a 375-mile stretch between Galveston, Texas, and New Orleans. This area is home to the single largest concentration of oil refineries and chemical plants in the country. In the weeks after Hurricane Harvey hit the Houston area in August 2017 and caused refineries to shut down, diesel and gasoline both rose more than 15 cents a gallon. 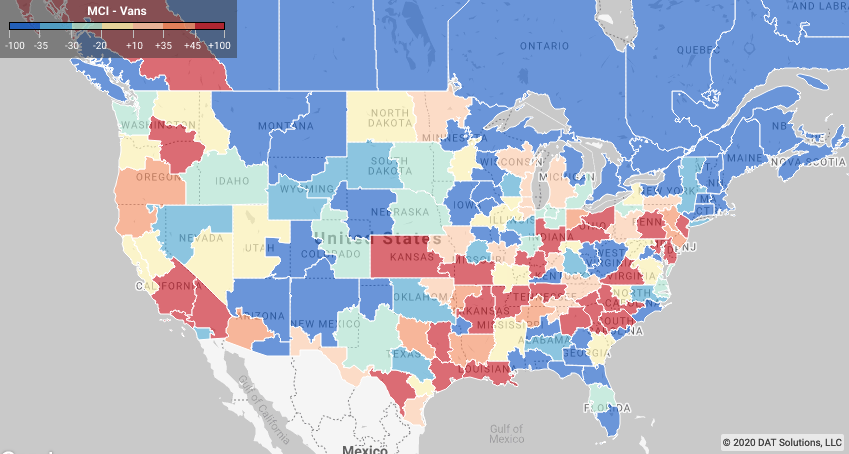 Repositioned freight: DAT’s 7-day Market Conditions Index shows high demand for truckload van capacity along the Gulf Coast as shippers looked to reposition freight ahead of two major storms last week. The biggest price increase on the top 100 van lanes by volume last week was the lane from Houston to New Orleans, where the average rate rose 17 cents to $3.19 per mile.

Volumes tumble on major van lanes: Average spot van rates were higher on 58 of DAT’s top 100 lanes by volume but the number of loads moved on those lanes fell 30.4%. Despite declining volumes, spot van rates were up out of several key markets compared to the previous week:

Van rates are still high: Spot van rates are at the highest level seen in the past five years for mid-August and currently up 25% year over year. DAT’s Ratecast predictive model expects van rates to plateau in the $2.00 to $2.05 per mile range over the next four weeks.

Reefer rates increase: Average spot reefer rates were higher on 37 of DAT’s top 72 lanes by volume on a 10.7% decline in the number of loads moved on those lanes. Rates were neutral on 26 lanes and lower on seven lanes compared to the previous week. Two notable lanes:

Harvest shipments are winding down: The U.S. Dept. of Agriculture reported that seasonal truckloads of domestic produce decreased by 3% last week and 12% for imported truckload shipments, which is just under 2,500 fewer loads of produce compared to the same week in 2019.

Bullish on flatbeds: As strong as spot market demand and rates have been recently for vans and reefers, the longer-term outlook for flatbeds is more bullish. As a weekly average, the national flatbed load-to-truck ratio was 42.2, touching above 40 for the first time since the week of July 21, 2018. That’s on the strength of new home construction, which jumped up 23% in July, according to the U.S. Census Bureau. Building permits also rose by 19% in July, fueled by low interest rates. All of these are positive indicators for future building activity, which will create more demand for flatbeds. 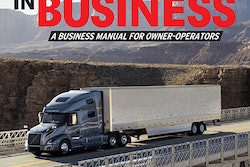