The number of loads posted to the DAT network fell 11.4% and the number of trucks increased 9.2% compared to the previous week. The combination of easing capacity and more predictable travel conditions appears to have brought spot van, refrigerated and flatbed freight rates to a high plateau, well above their averages for the month of February.

Load-to-truck ratios plateaued this week after several weeks of gains, according to DAT.

These are national average spot truckload rates for the month through March 14. They include a calculated fuel surcharge; diesel averaged $3.07 per gallon last week, up 3.3% compared to the previous week.

The seven-day average van and reefer line-haul rate, which excludes fuel, were all-time highs for the DAT network. The van rate averaged $2.40 per mile; the reefer rate was $2.61 per mile.

Flatbed demand stays elevated: Flatbed load post volumes have been on the rise for four weeks in a row and the national average flatbed load-to-truck ratio rose from 74.6 to 77.6 last week, more than 15 points above the February average.

The average spot rate increased on 50 of DAT’s top 78 flatbed lanes by volume compared to the previous week. Twenty-two lanes were neutral and the rate declined on six lanes. The country’s busiest lane for spot flatbed freight last week, Lakeland, Florida, to Miami, averaged $3.15 a mile and is up 11 cents over the past four weeks.

Flatbed market to watch: Baltimore is the number-one Roll-on/Roll-off (RoRo) port in the United States and handles most of the East Coast’s market share of RoRo cargo annually. Baltimore’s proximity to major farm and construction equipment manufacturers in the Midwest makes it key origin point for agriculture, farming and mining machinery. According to import data from PIERS, tonnage of RoRo equipment in February is up 301% year over year. Construction equipment represents 66% of total RoRo volume imports through the Port of Baltimore, or the equivalent of 600 truckloads in February 2021, which is about 340 more truckloads compared to February 2020. So far, things are looking good for flatbed and specialized carriers.

Van volumes level off: While the number of loads moved was up 2% across DAT’s top 100 lanes for van freight, overall van load post volumes fell 23% week over week. With 11% more truck posts, the van load-to-truck ratio dropped from 7.81 to 5.43. The average rate improved on 44 of DAT’s top 100 lanes, was neutral on 27 lanes and was lower on 29 lanes.

Van markets to watch: Pricing held firm in key van markets despite declining outbound load volume, indicating that capacity is tight. In Memphis, volume was down 10%, but tight capacity helped push the average van rate up 9 cents to $3.29 a mile compared to the previous week. In Atlanta, load volume declined 13%, yet the average rate increased 5 cents to $2.74 a mile. And in Los Angeles, the average outbound rate increased 2 cents to $3.32 a mile despite 27% less volume.

Reefer rates cool: Spot rates in the reefer sector remain exceptionally high for this time of year. At $2.95 per mile, the national average spot reefer rate is 75 cents higher compared to the March average in 2020. Colder weather in the upper half of the U.S. this week should keep reefers in demand as shippers add “protect from freeze” to bills of lading to prevent temperature-sensitive dry freight from freezing.

Load post volume in the temperature-controlled sector dropped by 23% week over week. With 8% more truck posts last week along with fewer load posts, the reefer load-to-truck ratio slipped from 15.62 to 11.02. The number of loads moved on DAT’s top 72 reefer lanes by volume was virtually unchanged compared to the previous week. The average rate, however, was higher on 43 of those lanes, neutral on 12, and lower on 17 lanes. Again, tight capacity is providing a toehold for spot truckload rates. 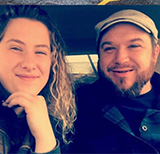 Kloe Myers and John DowdyOn March 16, 2020, Myers was driving as her partner, Dowdy, was in the sleeper. She had just passed through a weigh station on I-75 just outside Atlanta when she saw people in distress on the side of the road with the bed of their pickup truck on fire.

She safely pulled their truck over and maneuvered it for force traffic around the scene. She awakened Dowdy and grabbed the fire extinguisher as he got dressed. Myers quickly extinguished the flames as Dowdy helped the others pull boxes and bags of smoldering items out of the pickup bed.

“We were trying to prevent the fire from spreading to the car they were towing,” Myers said.

Dowdy ran to their truck and handed off gallon jugs of water they were carrying. The group used them to douse everything and stomped out smoldering embers.  The driving team learned the three motorists were in the process of moving.

“We were able to prevent damage to the car, but they were pretty upset that they lost everything they were moving, mostly personal items and all their kids’ toys, but they thanked us for stopping,” Myers said. “It all happened so fast.”

Myers has been driving for less than two years. She and Dowdy have been driving together for over a year. They’ve come upon fires in the past and try to always be prepared.

“I try to help everyone I can when I see them broken down on the road,” she said. “If I can’t stop, I feel bad. The side of the road isn’t always big enough for me to pull over.”