The Occupational Safety and Health Administration (OSHA) sent its vaccine mandate recommendation to the White House for review on Tuesday evening, and already one major trucking organization has spoken out against the move.

The mandate, announced by President Joe Biden almost five weeks ago, would only take effect once the Office of Management and Budget (OMB) completes its review and it’s published in the Federal Register. OSHA has been tasked with developing and implementing a rule that would have employers with 100 or more workers require COVID vaccines or regular testing, which could impact 80 million or more Americans.

American Trucking Associations (ATA) CEO Chris Spear in an email to members Tuesday night said his group "is working to ensure the ultimate rule, if and when it issues, takes into account the vital work that ATA members do every day in delivering life-saving COVID vaccines, medical supplies and the necessities of life."

Spear cited the trucking world's essential, frontline work throughout the pandemic and warned of "potentially dire consequences" to the executive action. Furthermore, the mandate would highlight the divide between large and small trucking operations, as it only applies to businesses with 100 or more employees.

[Related: An edge on growth: One way small fleets might benefit from Biden's vax mandate]

"If these mandates are designed to actually better protect all Americans, how are employee lives at a smaller employer less important?" asked Spear, adding that drivers spend most of their time alone in a truck, which is "literally one of the safest places in the world" during a pandemic.

Spear went on to caution that the testing regime proposed by Biden would be onerous for the industry, and that the supply chain at large hinges on truck drivers' ability to get to work.

Previously, OOIDA voiced concerns about the mandate, and a handful of states and businesses have already signaled intention to resist the move.

The U.S.’ average price for a gallon of on-highway diesel is now $3.586 – the highest point since the week ending Dec. 1, 2014, when prices were $3.605 per gallon. Steep recent rises are evident in the chart below showing average national prices.

The nation’s most expensive diesel can be found in California at $4.425 per gallon, followed by the West Coast less California region at $3.784 per gallon.

The cheapest fuel can be found in the Gulf Coast region at $3.335 per gallon, followed by New England at $3.459 per gallon.

ProMiles’ numbers during the same week saw fuel prices increase by 8.9 cents, bringing its national average to $3.438 per gallon.

C.H. Robinson has announced the names of 17 carriers honored with the 2021 C.H. Robinson Carrier of the Year Award. The carriers presented with this surface transportation-focused award are chosen from the company’s network of 73,000 contract carriers.

Winners are honored with a C.H. Robinson-hosted celebration and exclusive prizes. The carriers were selected based on their ability to consistently deliver on time and in full for customers, their adoption of carrier technology to drive efficiencies for themselves and shippers, and their effort to go above and beyond to successfully support shippers’ needs.

During this fourth annual award event, the winners will also be recognized through C.H. Robinson’s ongoing carrier appreciation initiative, which has given away $100,000 to drivers while encouraging people across the nation to write digital thank you notes to truck drivers who help keep the world moving, even during a pandemic.

In honor of the 17 Carrier of the Year Award recipients, the C.H. Robinson Foundation is increasing its previous donation amount of $1 per thank-you message to $17 per thank-you message sent via ThankTruckDrivers.com through the end of October. The donation of up to $25,000 will go to St. Christopher Truckers Relief Fund, which helps truck drivers in need.

The full list of the C.H. Robinson 2021 Carrier of the Year Winners includes:

“Every carrier on this list is deserving of praise for going above and beyond normal expectations to successfully deliver on behalf of shippers during a historically challenging market,” said Pat Nolan, vice president of operations for North American Service Transportation at C.H. Robinson. “Not only did they rise to extraordinary challenges during extraordinary times, but they also successfully used carrier technology to increase automation and efficiencies that help ease the pressures of a constrained capacity market so many shippers are currently navigating.” 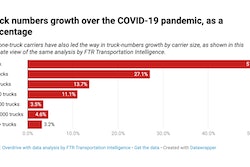 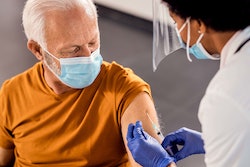 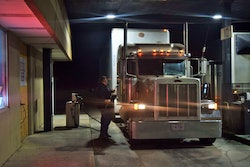