A group of owner-operators and other truckers followed through this week on their May-announced plans to stage a rally in the Florida capital of Tallahassee.

Video of the protest efforts made its way to social media channels this week, and local news outlets gave the protest some airtime, too. The truckers, in a statement to Overdrive in May, said they were protesting low rates, working conditions, high insurance costs and brokers’ lack of transparency with truck operators regarding load and payment agreements.

According to the city’s local paper, The Tallahassee Democrat, two truckers were arrested for blocking intersections in town.

Per prior Overdrive reporting, the truckers organizing the protest sought for a “peaceful demonstration,” free of blocking roads or intersections. The two arrests, however, stemmed from a 15-minute blockade of a prominent intersection in town, according to The Tallahassee Democrat. One trucker was arrested for his role in blocking the intersection, and the other was arrested for impeding the arrest of the first.

See below videos and photos from the protest, gathered from media outlets and others who witnessed the rally. 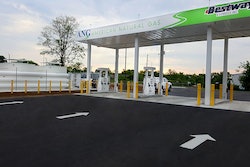