I’m out at the Crossville, Tenn., truck show of the Music City Chapter of the American Truck Historical Society, where things are just getting under way. Bill Bradford, semi-retired owner of a business selling Land Rover parts in South Pittsburg, Tenn. (between Monteagle and Chattanooga), is here with this sweet long-wheelbase (relatively) 1978 Freightliner cabover, powered by a 400 Cummins, 13-speed transmission (see below).

He bought it several months ago from an owner based in Grain Valley, Mo., who showed it around the country for years, and it started its life hauling in Oregon.

You’ll be interested to note that Bradford’s also coming to the end of a three-year “money pit,” he says, in a rather affectionate way — “I’m afraid to look at how much I’ve put into it” — total custom restore of a 1973 Kenworth K100 that he’ll unveil at either the Cookeville Music City Chapter show or Rush Nashville’s Chrome & Class event in October.

He’s also the owner of a custom 1993 Peterbilt 379 with a 127-inch ICT sleeper he typically travels to shows in. His wife, not with him today, took one look at the Freightliner’s 37-inch mattress in the 42-inch sleeper and figured she’d be sitting this one out.

Bradford drove for the Farley’s and Sathers Candy Company out of Chattanooga part-time through the fall of last year. “Just a great company to run for,” he says, though they liked him a little too well. “I’d typically do two-day runs, out to Charlotte and back.” Then it got to where he’d get messages asking if he could pick up in Greenville, S.C., say, on the way back in to Chattanooga.

And here he thought he was semi-retired. In any case, enjoy the photos of this classic! 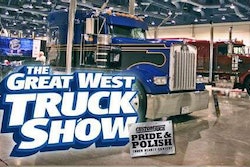 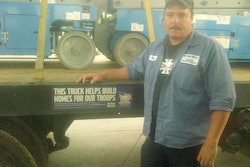