A University of California Riverside researcher made an interesting comparison this week. And I quote Mr. Bill Welch, principle engineer on a new UCR study of commercial charbroilers:

An 18-wheeler diesel engine truck would have to drive 143 miles on the freeway to put out the same mass of particulates as a single charbroiled hamburger patty.

Welch was talking about research the university put into emissions from the restaurant industry toward developing particulate filters for said industry, and I wish I could take credit for calling out the comparison, which, though favorable, does what so many mainstream-media items about trucks do: Capitalize on pre-existing public attitudes about heavy truck equipment.

That aside, the folks at the Maryland-based but nationally focused Diesel Technology Forum take the proper credit — in a press release issued yesterday they took the time to point out the realities of post-2007 truck diesel emissions. “While the primary focus of this new study was on emissions from commercial charbroilers,” said Diesel Technology Forum Executive Director Allen Schaeffer, “this comparison clearly illustrates the significant improvements from clean diesel technology on California’s air quality. In fact, the study also found that the particulate matter inventory from commercial cooking is more than double the inventory from heavy-duty diesel trucks nationwide.”

By way of characterizing the advancements engine makers — responding to CARB and U.S. EPA-imposed emissions limits — have made in the last decade and more, Schaeffer added that we’re at a situation today where “it now takes 60 of today’s technology trucks to emit the same level of PM emissions as one truck built in 1988.”

That ought to get the mind going.

Xtra Mile Award winner
XRS (formerly Xata) has determined the big winner in its making-a-difference award meant for on-highway haulers, which I blogged about early in the week. With those in the running offered up in competition for votes from fans on XRS’ Facebook page, Rickie Youngquist came out on top for his involvement in Truckers Against Trafficking (TAT) and Free the Girls, an organization that provides job opportunities to women rescued from sex trafficking. Youngquist (pictured with his daughter, Lydia Baker) was nominated for the award by Kylla Leeburg of TAT. As she wrote, “Rickie is a strong supporter of Truckers Against Trafficking (national hotline number: 888-373-3888) and educates his fellow truckers about the signs of sex trafficking and what to do if they see it. But Rickie went a major step above and beyond when a group called Free the Girls contacted TAT about needing to transport thousands of bras from Colorado to Chicago in order to load them on a cargo plane to Africa.” In the program, sex trafficking survivors are given the bras to sell in their African villages, making three times the national average wage. Youngquist volunteered to drive the bras from Colorado to Chicago, only being reimbursed for fuel expenses, and has offered up his services in future as well.

In response to the news that he had won, Youngquist posted on Facebook: “Ever since I partnered with TAT, being a truck driver has brought new meaning to my life. I have the chance to help others while driving a truck.” 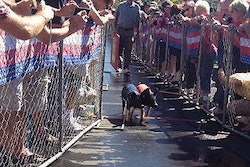 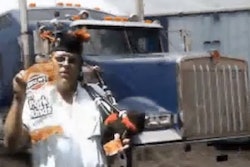 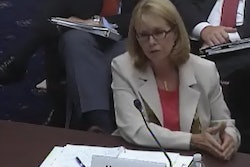 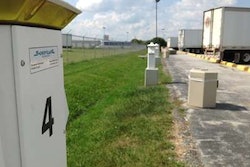