Be careful what you ask for. Those words came from owner-operator Henry Albert. He wasn’t talking about the Owner-Operator Independent Drivers Association’s call, issued last Friday, for the resignation of FMCSA chief Anne Ferro. Those words summed up his message, essentially, following a lot of what he heard from drivers participating in the now-long-ago listening sessions on the hours of service revisions that went into effect last year.

On those revisions — those relative to the restart particularly onerous, Albert notes — he saw then that FMCSA could easily be viewed as having listened to drivers in crafting the rule, if they didn’t hear the call for flexibility, as I’ve written. From my memory of the listening sessions, take these two major complaints, from drivers:

Ask and you shall receive: Later, we got the 30-minute break and the requirement that two 1-5 a.m. periods be included in the restart. When OOIDA’s call for Ferro’s resignation came across the desk last week Friday, Albert’s words came to mind. At once, I was well primed to meet the reasoning behind that call with an affirmative nod of the head. With certainly more-than-routine driver and trucking vilification in the headlines all week last week, when regulatory consultant Richard Wilson posted early Friday morning on his Facebook profile about Ferro’s June 3 entry on the Fast Lane blog, he made arguments similar to those OOIDA would make later on that day in their own public letter to the Department of Transportation secretary, and it was easy to see Ferro’s post as out of hand for the chief trucking-safety regulator in the nation.

Wilson, and OOIDA to a certain degree, equates the tactics employed in the blog to those employed by the law firm’s “serial killer” ad you’re likely familiar with at this point.

Ferro’s post’s rhetorical strategies are indeed more akin to those of a marketer unconcerned with reality beyond his or her pursued goal, as the post picks out a few tragic examples of fatigue-related crashes to make a case that Congress shouldn’t suspend changes to the 34-hour restart. Look no further than the post’s primary (before the colon) title for evidence of such exaggerated strategies: “Congress shouldn’t roll back safety,” as if the restart’s 1-5 a.m. periods and once-per-week use provisions are the bedrock of safe operation. Not to mention, too, that there is no mention of the 34-hour restart in the post, period, essentially discouraging those outside the know from engaging in the particulars of the debate.

Then there’s her finale, in which the Administrator does urge further study on hours generally, then adds: “But this we know right now: suspending the current Hours-of-Service safety rules will expose families and drivers to greater risk every time they’re on the road.”

To the less-informed observer (i.e., members of the general public, quick on the uptake to call their Congressional representatives), it sounds like the entirety of the hours rules are at stake.

In spite of all, though, more than one commenter wondered whether an outright call for Ferro’s resignation was the right move — might it render OOIDA’s regulatory efforts outside the Congress and the courts in future less effective, whether Administrator Ferro remains at the head or not? Wilson himself stops well short of calling for anyone’s resignation in his posted commentary as well as later follow-up conversation, instead hammering away at issues of regulatory change — the need for a greater focus on chameleon carriers, for instance, and the entry-level training standards FMCSA seems to have been dragging its feet on for years now.

However, if our poll on the issue is any indicator, most readers are in favor of OOIDA’s move — as of this moment, more than 90 percent of poll respondents say they support it. If you haven’t voted as yet, you can do so via this link.

There’s still that nagging little voice in the back of my head, though, Albert’s thoughts on the hours listening sessions back when. Say Anne Ferro were to resign and get on going along her merry way. Might what we got next, ultimately, be well worse than what we have?

Below find a round-up of some other voices on the issue, and weigh in yourself below or via the poll:

Commenting at OverdriveOnline.com:
“Safetygirl”: [In Anne Ferro’s blog post mentioned above] there was so much gloss and so little right that it was frustrating to read… . We all want safety. My kids are out there driving with the big rigs. Let’s not allow our leaders to use tragedy to build their own political careers. Let’s focus on the real problems and address them. If necessary we should prune out those who stand in the way of Safety.

Mark Platt: OOIDA has finally stepped up on this issue, and they have it right. … If we do not gain control of this runaway [insurance-hike] legislation and rulemaking this administration is going to irrevocably damage our economy.

“John”: People in glass houses shouldn’t throw stones. Ms. Ferro has been the only administrator that has actually sat down with drivers and seems to have a real concern about our issues. She doesn’t make the laws and she doesn’t set the agenda — the White House and DOT Secretary do that.

Allen Smith: This statement in OOIDA’s letter is clearly one that should be taken seriously, regardless of the outcome of their intended request: “FMCSA has largely ignored or moved at a snail’s pace on efforts that professional truckers know will have a positive impact on highway safety. The clearest example of this is the absolute lack of action on entry-level driver training standards, despite the fact that Congress first called for such standards more than 20 years ago and restated that call in the recent MAP-21 highway bill. Despite the common-sense safety benefits of such an approach, the agency has argued that the benefits of training cannot be proven, and that it must study the issue further.”

Weigh in yourself via the poll at this link. 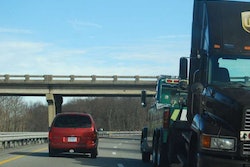