Regular readers will remember the House’s version of the highway bill for its inclusion of language that could have been something of  “poison pill” for carriers currently not rated (as well as those rated Conditional) in the Federal Motor Carrier Safety Administration’s safety rating system. The worry was that by excluding unrated carriers from the mix of those deemed OK for brokers and other parties to utilize and avoid negligent-selection lawsuits in the event of an accident, a chilling effect on business for such carriers could well have been the result.

No such provision was included in the Senate version.

You can explore the issues behind it all in previous posts available at these links, in chronological order:

According to a bulletin issued today to members of the Transportation Intermediaries Association, which was the primary supporting organization of the “Interim hiring standard,” the entire provision’s language has been removed from the bill reconciled between the House and Senate versions and announced today. The removal followed efforts to change language of the standard in a variety of ways explored in the previously linked posts.

Here’s part of what TIA noted in its bulletin:

TIA has advocated for over three years for the creation of a National Hiring Standard for entities that hire motor carriers. Such a standard would eliminate the confusion caused by flawed data from the Federal Motor Carrier Safety Administration’s (FMCSA) Compliance, Safety, and Accountability (CSA) initiative, which dramatically increases the threat of negligent selection lawsuits for TIA members and their industry peers.

Unfortunately, at the eleventh-and-a-half hour, the National Hiring Standard was completely stripped from the conference report. TIA received strong support from our champions in Congress, including Rep. John Duncan from Tennessee and Senator Deb Fischer from Nebraska.  However, in order for the necessary bipartisan majority to move the bill to the President’s desk, the Conference Committee members made concessions and removed several of the most controversial provisions from the bill. TIA maintains that a legislative solution such as the National Hiring Standard is not controversial, but should be a common sense solution to reduce the existential threat of frivolous lawsuits based on flawed data.  …

We’ll have more news in the coming hours and days on what does and doesn’t remain in the bill as it (if it) moves through to final passage — here are the basics for now.

TIA also noted in its bulletin that CSA provisions remained as of now:

The conference report contained language that will reform the CSA initiative. Specifically, the National Research Council will be required to conduct a study on several aspects of the CSA initiative. After studying and reporting back to Congress, the FMCSA will be required to implement the changes recommended by the Council. After those changes are made, a certification by the Inspector General of the DOT is required to ensure appropriate action by the FMCSA was taken. Additionally, all scoring and “analysis” within CSA will be removed from public view. Inspection data, violations, out-of-service orders, and absolute measures will remain publicly available within the initiative. 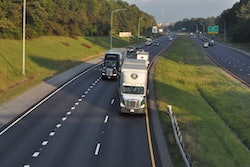