Regular longtime readers may remember roots rock and country outfit Pure Grain — based in Southern Indiana near Cincinnati, the group’s “Out of the Storm” record from 2009 graced these halls (and my erstwhile “Exit Only” back-page column in Truckers News) partly on account of their lead vocalist at the time, Chris “Carolina Kid” Taber, a then recently former long-haul CDL driver. You can read Taber’s story as it stood in ’09 at that previous link.

Taber left the band and music altogether in 2012, reports Pure Grain bandleader Brian DeBruler, along with news that the other reason I wrote about the band, outside of the quality of their music, has recently passed quite a significant milestone.

As he posted on Facebook earlier this week, the first video he and Michelle D’Amico (also husband and wife and now proud parents of a young daughter) ever produced for the band, for its “Truckin Song,” recently passed 1 million views on Youtube.

That’s a lot of eyes on and ears tuned to a song that remains well outside the mainstream of music. DeBruler went on to the credit the support of venues like Truckers News, the Dave Nemo Show and other Sirius XM programs for getting it out there, likewise “every truck driver out there on the road… Truckers keep America and Pure Grain rolling!”

Since the 2009 release of the song and the “Out of the Storm” record, the band has toured extensively around the nation, performing anywhere from hometown honky-tonks to state fairs and large outdoor festivals like the Country USA show in Oshkosh, Wis. The band’s also released two more records in “Sowing Seeds”(2011) and “Indiana Sun”(2015).

Over the years, too, says DeBruler, “we have met many drivers, online and in person making appearances at MATS, talking with drivers live on the Dave Nemo show, and performing at other regional trucking events like Expedite Expo. I think there is a huge parallel between being and independent artist and a commercial driver, just look at artists like Dale Watson. As traveling musicians we face similar challenges: if the wheels aint turnin’,  we ain’t earnin’.

“We are booking our own gigs, making our own records, and blazing our own trail across the country. Just like independent drivers, we have to have a full schedule to keep the bills paid. It is a challenge to schedule the gigs while traveling great distances, switching drivers with little sleep, running the van around the clock just to make our next destination. Traffic, adverse road and weather conditions, fuel costs and trying to eat healthy on the go — all are things both drivers and musicians deal with every day.”

He went on, channeling the reality of artists like Taber and the many contributors to Overdrive‘s own Trucker Talent Search competition:

It’s no surprise there are many professional drivers out there who pick up a guitar and write songs about their experiences, loneliness, missing their families, and the struggles of being on the road. Our songs are one in the same; the only difference is because of the people who love our music we have been very blessed with the opportunity to make a living doing what we love, telling our tales and singing our songs traveling the roads of America. As an independent artist with no major corporate support, like most of America, we have to work hard to stay afloat. We are grateful of the support and love we have received from the truck drivers who have embraced us over the years.

Though I have always identified with and felt drawn to trucking since watching Convoy and Smokey and the Bandit as a child, things really hit home for me last year at MATS in Louisville. After doing an interview with my brother and Sol Records labelmate Dallas Moore live on SiriusXM’s FreeWheelin’ with Meredith Ochs and Chris T., while walking around the convention checking out the trucks I found a vendor booth selling a compilation CD of trucking songs… The four-disc set had classic trucking tracks from legendary artists like Jerry Reed’s “East Bound and Down,” Dave Dudley’s “Six Days on the Road,” Eddie Rabbitt’s “Driving My Life Away” and Alabama’s “Roll On (Eighteen Wheeler),” just to name a few, and then I saw it, right there on disc 3: “Truckin Song,” by Pure Grain.

Though I was somewhat perplexed and almost angry in that I had never licensed the song for release on said compilation nor been paid for it to this day, at the same time I was overwhelmed with a flattering sense of that we had finally arrived and were truly embraced by the trucking culture of America. It felt good.

Watch for more from the band their website: www.puregrainmusic.com. 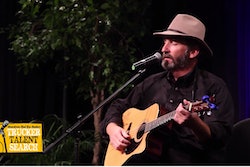 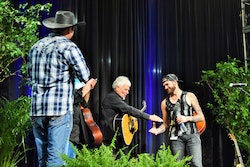 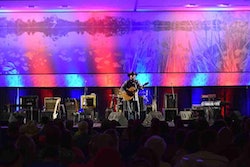 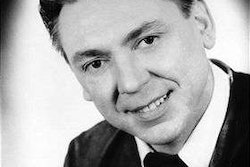 Results: The top 10 trucking songs of all time