Judging from past polling here at OverdriveOnline.com, one might have been justified in the assumption that it was only a matter of time before a Donald Trump campaign image appeared on the side of dry van.

In this case, though, it’s a straight truck, and the driver’s not a highway hauler but an artist. Here’s a shot of Julian Raven’s Unafraid and Unashamed tour truck from Raven’s Facebook page for the effort:

Ahead of the Iowa caucuses coming up next month, as reported in this story from the Northeastern Iowan, state residents and others on hand for various Trump rallies are getting a taste of truck-side art, an original painting by Raven reproduced on vinyl.

Raven, notes the Northeastern Iowan, is a New York-based painter who spent a couple months painting the work (find some shots of the work in progress via the tour’s Facebook page), then trekked off the Iowa with the truck-side reproduction in a grassroots show of support for the real estate mogul in his bid for the White House.

Here’s a relevant question: Seen it on the roads yourself of late?

Here’s hoping the weekend is a good one. 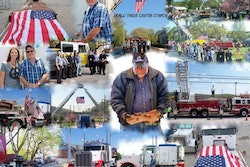