Super-Air is an automatic tire inflation system with origins in Brazil in the 1980s, says James Brotz, former driver and today serving as Super-Air’s director of sales and marketing in North America. In that role, though, he “does a little bit of everything,” including some system design for the variety of applications the system’s utilized in, anything from an over-the-road owner-operator truck to garbage fleets, where the company’s made some inroads the last several years. While pressure monitors have been becoming more and more common among owner-operators over many years, Brotz says, they’ll only take you so far without an active connection to the air system for inflation purposes.

“If you hit something going down the road” that causes inflation pressure to run toward dead-drop flat, you’ll still be stuck with a road call or a tire loss in most cases, he says.

Tire-pressure inflation systems will get you to the next service location, he says. “If you slice a sidewall or something – none of the systems are going to save you, but it will handle a cigarette-size open hole. Down in Brazil originally, they had a guy come in from a run. He pulled up and had been running with a hole in his steer tire for 1,500 kilometers.”

He pulled in and shut down the truck, Brotz says, and “the steer tire was flat before he got out of the truck. A lot of drivers will just put a plug in and … finish the route before fixing it – this way, [depending on how far away you are and the severity of the problem, you might be able to] get to your own shop” to get it done.

It goes to show what such systems are capable of, and there are several out on the market today of varying design, including the Aeris from Stemco and Pressure Systems International/Meritor’s long-available systems. (There’s also Hendrickson’s TireMaxx for trailers and PressureGuard‘s systems as well.)

The reason Brotz called in was to note improvements Super-Air’s made geared toward both functionality and durability in recent times, increasing the system’s usefulness, he believes.

Major components are being made by Bosch, including the control unit that operates the system. “We had some plastic parts that were giving us issues,” he adds, which have been updated or replaced with more durable parts. “We have added a fully adjustable electronic-controlled system – the carrier can set it to whatever pressure they want, say if they’re hauling aggregate and going off-road,” the driver can use the in-cab control to “drop to whatever [pre-set] pressure they want and then go back to a highway pressure.” He also gives the example of setting a loaded versus an empty pressure.

For $2,000 “we can do all three” axles on the tractor, another $1,400 or so for the trailer, if needed, he says. The trailer system can be a through-the-axle mount, a new option available for the Super-Air system. Overall if it functions as intended to add life to your tires with consistent pressure, improve fuel economy and avoid a single, time-consuming road service call, particularly if you’re running wide singles where a down tire can easily mean a rim needing replacement as well, you could easily pay for the system and then some for your return on investment.

Down-the-line maintenance costs should be considered, too, however. Brotz notes the company recommends replacing the check valve associated with each position — about $20 apiece — “every six months to yearly, or with a tire rotation or tire change.”

Brotz says the system’s available via the NexTran Truck Centers network and several dealerships as well.

Anybody in this audience outfitted with such a system today? What’s been your experience? 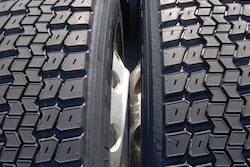 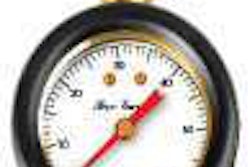