I spoke to Babin this afternoon briefly just to get his thoughts on the progress of his H.R. 3282 ELD Extension Act of 2017 — whether he felt the two-year-delay bill stood any chance legislatively at this point.

Over the next two weeks, that would be a no, Babin said. “It’s going to take an executive order by the President to delay this until we can work these bugs out. And there are a lot of bugs.” He cited analyses like OOIDA’s and others’ showing large carriers utilizing electronic logs with comparatively high crash rates, reports like Overdrive‘s feature from the October issue on hacking potential, and more. “DOT has already granted a waiver to ag and [livestock] haulers for a period of 90 days. We think the entire industry ought to have that waiver, at the very least, and we’re trying to get the President’s attention. That’s what we’re trying to do” at this point.

Babin, who learned to drive truck in the army, piloting deuce-and-a-halfs and 10-ton trucks, later driving commercially hauling lumber back stateside, says his office has “reached out to DOT, to the vice president’s office, to the president himself.” He was also in attendance at the Baytown, Texas, rally held yesterday. “We’ve talked to so many truckers and associations and individual independent truckers and small- to mid-sized truckers. We understand their plight – these small-business men, whose profit margins are already thin, when you have to spend an average of two-to-three thousand plus repetitive monitoring costs, it’s just an additional burden on someone who’s had to invest $100,000 plus per truck” in many cases, and more in taxes, tags, insurance and everything else. ELD costs go “right on top of all of this.”

It’s possible to do ELDs with much less than a $2,000 initial investment, some coming with no directly associated monthly fee at all beyond cellular costs, but some units are that expensive. All of this — the cost burdens on small businesses in today’s trucking — all of you well know, though it bears repeating.

“A lot say they’re just not going to be able to compete” in the aftermath, Babin says. “We’ll have a shrinkage of the driver pool, the number of trucks on the road will decline, and increases in the cost of consumer goods” will result. “This is a regulatory burden from the Obama era. It’s why President Trump won the election – he was elected by people who didn’t feel like the federal government was listening to them. We hope that the president will hear these thousands, some say as many as a million of them out here, who feel like their livelihods are being taken away from them. …

“These are the people who voted for Donald Trump – the forgotten ones.”

Speaking for the truckers he’s proud to provide a voice for in Washington, Babin said, “We’re the ones who make this country work. We drive these trucks and drive the goods across this nation. And they better start listening to us.”

Getting the President’s attention, he added, should be priority No. 1 for anti-mandate partisans, and all indications from yesterday’s events point to that being the case. With a focus on media, there’s hope yet the plethora of local coverage trickles up to a national network, which Babin views as crucial in any effort to catch Trump’s eye.

And speaking of that plethora of local coverage (and boy was there a lot of it compared to the relative silence around the D.C. and other events in October), below are more than a few links to some local reporting from the well more than 40 media-outreach events that happened from coast to coast, organized by state. There was more than I can include here comprehensively, though. Find plenty evidence of that in Google News’ page for the “electronic logging device” searchphrase at this link.

Find more via this link. 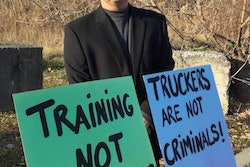