Previously in this series: Into the limelight: Sikh truckers in America

Owner-operator Binda Atwal, based in Fresno, California, purchased his 2016 Kenworth T680 in 2015 after jumping into trucking when pursuit of a law degree from San Joaquin College of Law stalled. He drove for a larger fleet for a time before buying the KW and jumping on with a cousin, Sunny Atwal, and his ABT, Inc., small family fleet. Binda’s uncle, Sukh Atwal, is also an owner-operator involved in the four-truck company, hauling reefer freight working with a variety of brokers.

Atwal, unlike many in the Sikh community involved in trucking, was born and raised in the United States. His father had been a teacher in the Punjab region of India before he came to the United States in 1983, after which Atwal was born in California.

His college education and command of English were equal parts of the reason he came to deliver English speeches at Bakersfield, Fresno and Sacramento sites of the October anti-ELD mandate rallies. A video produced by the Bhandal Focus company featured part of his Fresno speech and ultimately went somewhat viral around the time of the efforts.

“I love trucking,” Atwal says, but not so the ELD mandate and its introduction of mandated GPS tracking. Atwal’s recently begun running with a KeepTruckin ELD unit in his Kenworth. “What’s next, driver-facing cameras?”

With most of his entire life spent in the United States (he did spend a couple years in India as a young man), Atwal notes he’s been Westernized more than many of his counterparts in the Sikh community. “My hair is cut,” he says. “I don’t wear the ceremonial dagger. I don’t wear a turban. Some people would say I’m not religious,” but as with the millions of Americans who were raised on a set of values and teachings but haven’t seen the inside of a church in decades, Atwal carries core principles of the religion on which he was reared through his life in business.

“Don’t lie, don’t steal, don’t murder,” he rattles off just a few of the central tenets, which are quite similar to the Christian Ten Commandments, ultimately. “I say my morning prayers and try to do right by everybody.”

At once, his Westernization runs counter to a part of the culture around Sikhism – the emphasis on standing out among the crowd. Much of Atwal’s decisions in relation to the normative practices of Sikhs have been guided by practicality. Before he made his decision to go trucking in 2015, for instance, he applied for work as a corrections officer. “I had a long beard and my hair was long” before he made that application, Atwal says, but “applying as a corrections officer, he felt he needed to” appear more traditionally professional and cut everything back.

For him, trucking presented opportunity he didn’t see in a variety of other areas where work was a possibility. He could work for himself, for one, as a business owner. When he made the decision to go trucking in 2015, he was “slaving away” in a pizza kitchen with Tuesday and Wednesday as his weekend. “I had cousins and friends taking time off on the weekends” when “I’m at work in a hot kitchen,” he says. Trucking, oddly enough considering the often unpredictable nature of schedules, offered a more traditional schedule when he leased with ABT.

On something of a dedicated run, “I’d pick up Monday evening” in California, he says. “I’d deliver in Texas Thursday,” reload 20 miles away and be back Saturday. “I never had to get on the load board” searching at the far end of the outbound for the first 22 weeks he owned his truck.

Today, he’s made similarly structured runs to Washington State and back in addition to the Texas hauls. The company, like many Sikh-owned trucking businesses on the West Coast, generally serves as a critical link for the rest of the country to the food-producing areas in California. “We haul chicken and produce, frozen, some dry loads, a little bit of everything,” Atwal says.

Ultimately, the weekend home time and working for himself in large part were both great, but it’s the income possibilities he names as his principal attraction to trucking, for his young family – Atwal and his wife are the proud parents of two children, a four- and one-year-old. 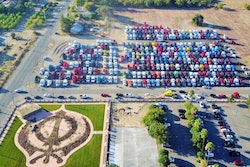 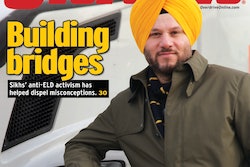 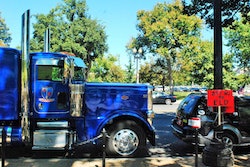