Owner-operator Mark Kirbyson regular readers may recall from an early 2018 edition of Overdrive Radio about Kirbyson’s planning-and-scheduling efforts in the wake of mandated ELDs (planning better only goes so far, he memorably noted, when road realities intervene). Kirbyson before and since that time has been using the BigRoad DashLink electronic logging device in his operation, leased to a small private fleet that he helps manage and which also operates for-hire on return trips between Ontario, Canada, and the U.S. East Coast.

Everything was going fine until recent times when in November he began having an issue with the ELD in his 2007 Caterpillar-powered Peterbilt kicking him into on-duty driving status while he was in the bunk. If that sounds familiar, regular readers may recall similar issues reported by Texas-based independent owner-operator Jon Hose last year, but not with the BigRoad system — he was utilizing the now-defunct One20 ELD. In his case, his inability to correct his record after it had happened the first time it did got him put out of service a day down the line.

Kirbyson, thankfully, hasn’t run into issues with law enforcement, but the technical issue continues despite his and BigRoad’s efforts to correct the issue, he says. “I thought it was the Bluetooth connection” causing the problems “at the start.” The first time or two it happened “there were other Bluetooth BigRoad connections in the parking lot” with him, he says. “Maybe that’s the issue,” he thought.

But talking with BigRoad techs they speculated the tablet through which he interfaces with the device might be the issue. “I replaced it,” he says, but “that didn’t change the situation,” which seemed only to occur with more frequency as time went on to the point that the ELD “wouldn’t let me out of driving mode – it would just leave me there” when he stopped and the engine remained in idle.

He’s tried other fixes for it, including having the engine’s electronic control module checked out by a Peterbilt shop — it showed “no codes, no nothing,” no problem, he says. BigRoad sent a new connection to the ECM, including appropriate new cabling, and that didn’t fix the issue, either.

Kirbyson’s question for all of you: Is this a problem anyone else in the audience has experienced — and if so, how did you solve it?

Kirbyson, the kind of owner-op who carries an actual stethoscope on the truck for engine-issues diagnosis, speculates the variable rpms of the Caterpillar motor’s idle may be causing the device to interpret that as the vehicle actually being driven, but he’s not 100% certain by any means. He does know his issue does not occur when the engine is off entirely.

“When I first got this BigRoad system, I never had any problem with it other than the fact that it was an ELD I had to use,” he says. “Now, I have a major complaint,” and according to Kirbyson the company seems at a loss to address the problem. BigRoad representatives did not respond to queries about the issue and whether this was a problem they’d seen in multiple operators’ trucks or not.

Given the rest of the small fleet’s trucks, mostly powered by Detroit and Cummins motors, aren’t having the same issue, Kirbyson’s resorted to the only practical solution he can think of in the short term. That’s application for a time extension on paper logs beyond the basic eight days allowed for a malfunctioning ELD. A quick turnaround from FMCSA had him up and running officially on paper with that extension by 9 a.m. after sending in the notification at 7 p.m. the prior evening to the relatively new central spot to report a malfunctioning device and request time to fix the issue. As I wrote in late June last year, there’s a central email for the purpose now: ELD-Extension@dot.gov, which gets routed to appropriate FMCSA state division offices (New York in Kirbyson’s case). From last year’s report when the email became available:

While the established route toward contacting the state division offices directly is still an option to carriers, the centralized email should also have the effect of allowing FMCSA headquarters to keep tabs on the “malfunctions occurring across the country.”

DeBruyne adds that prompt relay of incoming messages can be expected. “These are taken very seriously, and are dealt with as expeditiously as possible.”

Find detailed information on what to include with any extension request via this link.

“I’m going back to BigRoad to try to get them to pay the bill for having the truck ECM checked out,” he says of his next steps. “They don’t know how to fix it and they don’t want to take responsibility for how to fix it.” That, he says, is the most disheartening thing about the whole issue: “My biggest problem with this whole thing is the responsibility issue.”

With advancements in technology and this still relatively new mandate, the responsibility for malfunctions is, he believes, falling too often to the end-user. “Who are you leaving liable for this piece of technology working or not but the driver?” And this when, as a society as regards driver hours record-keeping, we all “relied on a simple piece of paper for so many years.

“Somebody’s got to be responsible.” 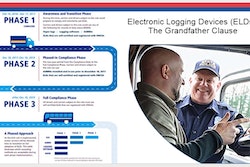