It’s a new day, and a new record, for one liquid bulk tank-hauling owner-operator, and regular readers will have been expecting it, no doubt. Heniff Transportation-leased singer-songwriter Bill Weaver’s third record since the classsic “Every Mile I Drive” burst through the trucking-music scene in 2016 with Southern rock-tinged tracks like “I’m Rollin'” and, my favorite, “Mr. D.O.T.,” among so many more, has arrived.

As I noted the last time I spoke with Weaver, he’d settled on simplicity for his third record’s title — “Number Three” — and it includes tracks that he’s been slowly releasing as singles leading into the record’s availability, now official via CDBaby and other outlets. CDs will be ready to ship within a week, meanwhile, and are available via BillWeaverMusic.com.

Most all of Weaver’s music is inflected with trucking subjects and themes, and the new record is no exception to that, with niche-specific tracks “Flatbddin'” and “Tanker Yanker” (just what Weaver knows best) giving way to more universal road anthems like the one I wrote about back in November, the excellent “The Ole Girl & Me.” The writing behind the music, meanwhile, just keeps getting better. If you’ll be at the Mid-America Trucking Show next month, I think you can expect to see him there. Stay tuned for more, and you can take a run through some of the album below.

Just a quick update here to report that owner-operator Howard Salmon, off the road for the time being as his son Liam is being treated for an otherwise inoperable tumor (as I wrote about two weeks ago), appreciates the support he’s felt coming from the trucking community. Liam, he says, has begun various rounds of targeted treatments he was approved for (with more than a few weeks yet to go), but last week took some time out from his stay now in San Francisco where he’s being treated for a little T-ball with some well-known players (find a couple views below).

They’re going through quite a lot, and were thankful for this brief moment of fun for the young man. Keep Liam and his family in your thoughts and prayers. I know I will. 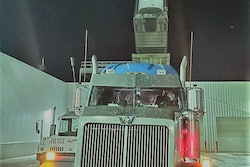