A two-decades-plus-long journey of the owner-operator-built Drivers Daily Log laptop logs software is coming to an end at the end of August.

I was alerted to the sunset of the long-in-operation program by longtime user Mike Crawford, among the many owner-operators over the years I’ve known who swore by the program before ELDs were mandated (Crawford’s 1994 Freightliner remains exempt).

I spoke yesterday to Bruce Luebke, an owner-operator leased to Prime for almost as long as DDL’s been around (20 years, he said) and who’s been behind a lot of the administration of the DDL program — anything from handling orders and putting out information to users via the DDL website to “reactivations and everything,” Luebke said. “I did the support” side of things, with a fellow trucker with software skills doing the programming. The pair conceived of the logbook program going into 1998 around Christmastime the previous year, during a phone conversation.

Under the old 10-on/8-off hours rules, what Luebke called “the biggest mistake made by drivers” had to do with recapping hours and getting your math off by as little as 15 minutes as you approached the limits of your cumulative hours. “If you made a mistake it could carry along” into calculations the next day, the day after that, and etc.

“We sat around and devised a basic function” for a piece of software — so that “the computer could do the math for you,” Luebke said.

Several years ago, Luebke’s programming partner, at 71 years old, was ready to retire. Finally with this recent hours of service revision, “we put it out that we would be closing down as soon as they did this new rule – we weren’t going to update anymore,” Luebke said. Besides, with the ELD mandate in effect, “sales had pretty much dropped to nothing” the last few years. Luebke himself no longer uses the software, given the mandate.

Not that Luebke ever made Drivers Daily Log his full-time gig. He’s trucked through it all, and in the beginning the software was free to any trucker who wanted to use it. When pirated copies began appearing for download in those days on the internet, DDL changed the model, encrypted the software, and when that was successfully cracked, double-encrypted it and added log audit and other functionality to what they were doing as well, updating every step of the way with the new rules as they came out.

A version for state troopers and inspectors, too, was utilized by hundreds as a method of double-checking logs at the roadside for violations.

It was particularly popular, though, with truckers. I can’t possibly begin to even count the number of owner-operators I’ve spoken to through my almost 15 years with Overdrive who used the DDL program at one point or another.

Fact is, though, for folks like Crawford looking around for a solution to the same problem – a capable substitute for paper logs – they won’t have to look very far to turn something up, particularly for a smartphone app or tablet. (May be out of luck for a laptop, but if you know of a comparable program, definitely leave a comment here – Luebke said he wasn’t aware of one.)

Electronic logging software on a myriad of smartphone/tablet-capable apps can be an effective replacement for DDL for those remaining in the paper-log regs environment with a pre-2000 engine or not venturing outside the 100-air-mile (soon-to-be 150-air-mile) short haul radius more than 8 days in any rolling 30-day period. Those apps have an altogether different feel than Drivers Daily Log, though, and of course you still need the ability to print the logs if requested by a roadside officer. (Most such apps offer the functionality, paired with increasingly common bluetooth-capable or other mobile printers.)

BigRoad is a common one, Ezlogz another, and there are many others, including the commonly used KeepTruckin – all three of those providers are in the ELD-providing business today, but got their start as logbook apps. (BigRoad is now under the AT&T Fleet Complete umbrella of companies, and did not respond to my queries about their software’s readiness for the hours of service changes in time for this story.)

KeepTruckin noted it was “ready for the changes to go into effect,” according to Travis Baskin, regulatory affairs head for the company. For those of you using KT for logs, whether with an ELD or one of the thousands still using the non-ELD base logbook app, if you don’t currently allow in your phone’s settings permissions for automatic updates of the software, you’ll need to make sure the logbook application version is current “by going to the [Apple] App Store or Google Play” if you’re using an Android phone, Baskin said. “We will be rolling out v32 of the app in September, which will have the changes built in and will automatically apply to logs on Sept. 29,” the date the new hours options go into effect. “And, of course, we have 24/7 support for all of our users if they run into any snags or have any questions.”

“I don’t think there’s any chance that Congress” will delay the rule, said Collin Mooney, executive director of the Commercial Vehicle Safety Alliance of law enforcement and industry representatives. He cited partisan acrimony and the COVID-19 pandemic’s priority on the plates of legislators as likely deterrents to the bodies agreeing on a highway bill before Sept. 29.

More about the upcoming hours changes: 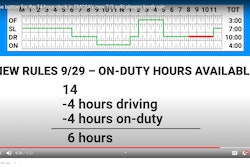