Since the report from the Federal Motor Carrier Safety Administration’s Truck Safety Summit about the agency’s intent to continue down the track — “full speed ahead,” ran a portion of the headline — in implementing the new hours of service rule on Sept. 29, yet more evidence is on offer that that is in fact the case.

FMCSA Director of the Office of Enforcement and Compliance Joe DeLorenzo, speaking Wednesday, Aug. 26, during an Overdrive‘s GATS Week Q&A after a presentation on the new rule, emphasized that the end of now former Acting Administrator Jim Mullen’s short tenure steering the agency in no way put the rule in jeopardy. Mullen’s last day at the agency was Friday, Aug. 29.

“At this point in time we’re so far down this road,” DeLorenzo said, “the commitment of the administration is to move forward. We’re hardcore out there training all the state folks, and trying to get as much outreach to the industry as we can. So as far as we’re concerned, it’s all systems go and get ready for the 29th.”

DeLorenzo spelled out just what that means, too, with regard to timing: The new rule will go into effect at 12:01 a.m. Eastern time on Sept 29 (9:01 p.m. on Sept. 28 for those on the West Coast), and offers tweaks designed to re-inject a measure of flexibility to hours of service accounting for drivers, including changes to the split-sleeper berth regulations widely discussed already in Overdrive and all around the industry.

Even given only four months between the final rule’s publication and implementation (by comparison, the electronic logging device mandate had well more than a year before effective implementation), having all the infrastructure in place to support the revised rule isn’t “much of a heavy lift,” said Mooney.

“FMCSA’s instructors are doing a lot of ‘train the trainer’ sessions with state representatives,” who then take that back to state-based inspectors. “It’s been going on for weeks,” he said in early August, with plenty states having finished the process.

Also, given the flexibility-enhancing nature of the rule changes for drivers who don’t anticipate changing how they’re logging their time, they won’t end up in violation. Thus, there will be no “soft enforcement” period of adjustment, regulators have noted, given the risk of violation for those who don’t fully get wind of the changes is low.

For officers who’ve “been around the block, split sleeper is not new,” Mooney said, referring to perhaps the most complicated of the changes. At once, drivers will be more likely to employ the split in these rules, given its new parameters. Among new logging options, the 30-minute break tweaks are most likely to be used by the largest share of owner-operators, according to Overdrive polling, followed by the split-sleeper changes.

“A lot of guys don’t even use the sleeper-berth provision” as it’s existed for nearly two decades, said Nick Wright, Kansas Highway Patrol trooper and public information officer. “With these new changes, though, I think more people might use them, which means we need to hone our skills on the new rules.”

Will enforcement be ready?

DeLorenzo, asked that very question, answered in the affirmative last week, invoking the relative simplicity of the changes in explanation as compared to, say, when the 14-hour on-duty window first came into play in the early part of this century. “We’re working really hard,” he said, “and some of us who’ve been around a long time remember the transition to the 14-hour rule, which was [more] difficult.”

In addition, there’s an advantage today that just didn’t exist back then when it comes to possibly more uniform enforcement. “That’s the ELD,” or electronic logging device, DeLorenzo said. “The drivers will hopefully get their assistance from their ELD provider in doing those [sometimes complicated split-sleeper] calculations.” For the roadside officers, they’ll “have the ability within our system to …. help with the calculations from the ELD (data) transfers. This is going to be my not-so-subtle pitch to [drivers to remember] how to do their ELD transfers, especially now, especially in the beginning as everybody’s learning how to do it right. Doing that transfer and getting it into our system will be a huge benefit,” a way to ensure that FMCSA’s interpretation of the new rule is applied uniformly as it can be at roadside.

ELD providers, of course, also have work to do in updating their software’s violation warnings, countdown clocks and the like for customers, as James Jaillet’s multiple reports on the ELD market, available via this link, make clear. As the hundreds of providers continue to consolidate, the necessity of updating software could be further impetus for marginal companies to close or sell to a competitor.

CVSA’s Mooney said he had not personally heard a peep from any provider regarding concerns about being compliant by Sept. 29. “I’m taking that as a good sign,” he said. As long as providers “completely understand the rule,” he added, updates should proceed relatively simply.

Stephen White, senior business development manager with ELD provider Geotab, echoed some of the thoughts of other providers who noted that the company’s systems will “automatically begin using the new rules” when they take effect. “Existing logs will not be affected. … Given the simplicity of the changes, they do not require a significant amount of new functionality from a technical standpoint.”

As previously reported, perhaps the most readily used e-log when it comes to owner-operators and small fleets, KeepTruckin, noted it was “ready for the changes to go into effect,” according to Travis Baskin, regulatory affairs head for the company. For those using KT for logs, whether with an ELD or one of the thousands still using the non-ELD base logbook app, if you don’t currently allow in your phone’s settings permissions for automatic updates of the software, you’ll need to make sure the logbook application version is current “by going to the [Apple] App Store or Google Play” if you’re using an Android phone, Baskin said. “We will be rolling out v32 of the app in September, which will have the changes built in and will automatically apply to logs on Sept. 29,” the date the new hours options go into effect.

As for barriers to implementation, petitions for reconsideration continue to languish, and previously reported language in the House of Representatives’ INVEST in America Act highway bill looks very unlikely to pass muster in the Senate, as previously reported. For folks at the trucking periphery like Geotab’s White, support for the changes seems broad-based. “There has been minimal resistance,” he said. “Given the current climate at this time we do not expect for there to be any delay in implementing the pending changes.”

Next up in this series: Hours changes and personal conveyance, coercion, rates 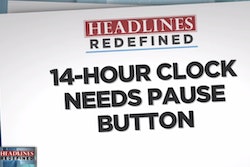 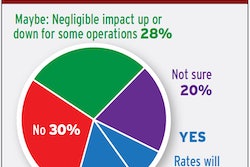