Among the more controversial aspects of the electronic logging device mandate was the increased emphasis on personal conveyance. PC became a mode that a carrier (including an independent owner-operator) could enable within any ELD to account for off-duty movement of the truck. Selecting PC mode keeps a truck’s driver on the off-duty log line when the truck is moving.

Some carriers set their own limits for acceptable PC distance/time, but generally the official guidance around it is vague other than what defines it. That’s truly personal uses of the truck outside the stream of commerce, including the addition in recent years of movement to a safe parking location if hours are exhausted by a shipper or receiver.

With the new hours of service provisions announced in May, the Commercial Vehicle Safety Alliance took the opportunity in its petition to the Federal Motor Carrier Safety Administration for reconsideration of the rule to ask for a mileage limitation on the use of personal conveyance. CVSA has previously asked FMCSA for this — without results. As of early August, “crickets” had been the response this time around, CVSA’s Collin Mooney said.

CVSA’s request argued that some “maximum allowed distance for personal conveyance” might eliminate inconsistent enforcement among inspectors as well as confusion for inspectors and drivers. Consistency is the case in the Canadian hours of service rules, Mooney pointed out, where 75 kilometers (about 47 miles) is the limit.

“We’re not set on having that same mileage,” Mooney said. “We’re just looking for something definitive, whether it’s time or distance.”

He added that there’s a fair amount of agreement between active law enforcement and trucking-business constituencies within CVSA, but “I can’t say it’s 100% buy-in” for defining personal conveyance limits, particularly among those in the wider trucking industry.

Mooney also believes a PC limit makes for an opportunity to address growing reports of coercion – whether by carriers or shippers – of drivers to use PC to mask excess driving since the advent of the ELD mandate. As CVSA wrote in its most recent petition, a limit would “ensure safer roads, as commercial motor vehicle drivers are on notice that personal conveyance time cannot be used as a safe harbor for driving hundreds of miles after exhausting their HOS.”

While such driver reports exist, evidence is scant that the problem is in fact widespread.

Those who would use PC this way “are basically undermining the industry and undercutting rates,” Mooney added. “It ends up doing the whole industry a disservice.”

That echoes a message that the Owner-Operator Independent Drivers Association’s Lewie Pugh delivered about the new measure of flexibility in the split-sleeper-berth rules, by way of congressional testimony in the Senate in February of this year. He argued for drivers to resist coercion attempts by carriers and shippers to use the new measures for economic benefit.

Regulators could help, Pugh added. “In order to maximize the safety benefits … drivers should have sole discretion over how and when they use each of the provisions,” he said.

Some truckers have argued the ability to pause the clock in the split-sleeper-berth cycle might be abused to mask duty time at the docks as drivers stand in readiness to drive, load or unload and wait. Such a practice could create added artificial capacity, the argument goes, and loosen the pressure on shippers to be efficient loading and unloading. As Pugh and others argue, carriers and drivers who allow this to happen are making a mistake.

Coercion to mask on-duty time, whether the coercing party is a carrier, broker or shipper, can be combated by coerced drivers by using the process put in place by the 2016 implementation of the Coercion Rule, as FMCSA’s Joe DeLorenzo made clear in a live Q&A with Overdrive during GATS Week last week. Furthermore, he also spoke to just what constitutes off-duty time for owner-operators in control of their own dispatch and schedules, including at the docks — a lot depends on the particular situation the operator is in. The particular exchange follows, with further information too about just where to find detail on the Coercion Rule’s provisions.

As far as the practice contributing to lower rates, most owner-operators don’t see downward pressure on rates emerging from the hours changes, according to recent Overdrive polling shown above. Asked whether truckload rates would be impacted by the shifts, almost 60% of readers answered either “No” or otherwise viewed the changes as having negligible impacts either up or down, depending on the operation. 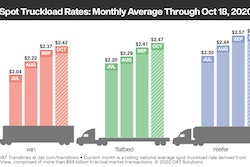