Take a 360-degree tour of a classy interior

A highlight of one of the big winners at the Great American Trucking Show, Blood, Sweat & Gass, was its interior.

The 2013 Peterbilt 389, owned by Bill and Sayra Rethwisch of Tomah, Wis., won Working Combo in the 2013-2014 National Chamionship Series, which concluded last week at the Dallas show. Its  green and white exterior scheme carries through seamlessly to produce a bright interior.

The interactive imagery in the first picture below allows you to look around all sides, including ceiling and floor, of that interior. Using a computer mouse, you can change the view. If using a mobile device, swiping the screen and tilting the device changes the view.

“We completely gutted it,” Bill Rethwisch said of the interior.  “we made fuel and brake pedals with our name engraved on them.”

“We put a Rockwood floor in here, painted it to match,” Rethwisch said. “The seats we had recovered with our name embroidered in them to match the truck.

“This thing has a sound system in here that probably a lot of DJs would be jealous of,” he said. To keep out the unwanted sounds, he added Dynamat soundproofing. 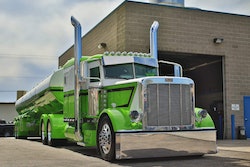 PDI Pride & Polish winners: Rethwisch’s ‘Blood, Sweat and Gass’ picks up another win, along with other repeaters 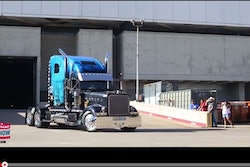 Pride & Polish competitors rolling into the sunshine after GATS 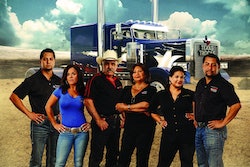 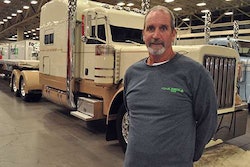