It’s not a Peterbilt or a KW in this case or even an actual pot of gold — it’s a 1991 Freightliner FLD conventional with a flattop sleeper that owner-operator Ron Stroke Sr. of Jefferson, Ohio, had newly painted back last summer. Shortly after the Sterling Gray paint — chosen in part to match his wife’s car — was laid on by Rocky’s Body Shop in his area the owner-operator got his decals on it at home where he parks and pulled it out for a picture. Lo and behold:

“I told my wife, ‘I’ve get to send that to somebody’,” Stroke says. Finally, just yesterday, he added the truck to our Reader Rigs gallery with this note: “Just came out of the body shop and the rainbow appeared. This must be my pot of gold!”

Stroke “built the truck originally as a glider kit in 1991” for an owner-operator in his area, who’s since retired. In 2004, Stroke bought it bakc and “have been running it ever since.” 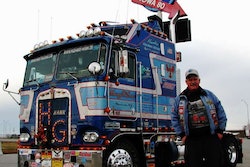 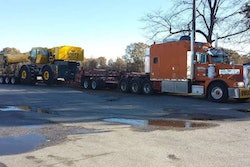 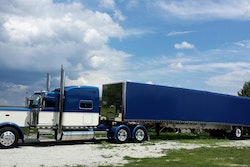