A few more details here about the restoration of the 1974 Mack FS786LST cabover and chassis, Post Coach custom office and trailer I’ve written so much about since news around its restoration began to come out in July.

When I was at the Great American Trucking Show in late August, I had a brief conversation with current owner Lathan McKay about his decisions surrounding just how to paint the truck, given Knievel himself commonly repainted it over the base red to reflect details of whatever jump he was about to attempt.

McKay describes the painstaking work he put into getting the various component parts of the ultimate paint design right as a process of cross-referencing archival photos from various points in Knievel’s career, including the era before the Mack was part of the operation (as I’ve written before, prior to Knievel got the Mack, the show operation was pulled behind an older Kenworth). The various logos on the sides “took six months to get off of a photograph,” he says, those on the passenger side reflecting Knievel’s 1970-’74 period, the driver side 1975-’76.

If you haven’t seen it in person, it’s a fine showpiece and as a piece of American history it’s great to see it moving closer to a final home right in the middle of the country to Topeka, Kan., History Harley-Davidson.

And as I wrote on Wednesday it will be making an appearance Oct. 15 in Kansas City. Follow this link for more: 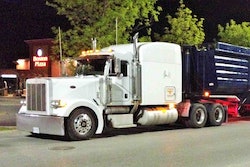 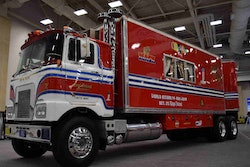 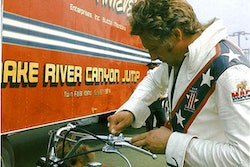