It’s been quite an eventful few years for the 1974 Mack FS786LST built to haul the show operation of legendary daredevil Evel Knievel. Known for his Harley-Davidson-jumping stunts through the 1960s, Knievel reached worldwide fame through the ’70s, shortly after which the Mack was employed in Knievel’s son Robbie’s own motorcycle-jumping escapades. It eventually fell into disrepair with less than 100,000 miles on the odometer.

However, after rescue almost four years ago from weeds and decades of weathering in Clearwater, Fla., the Mack and its trailer have been restored. The rig made a triumphant debut at events late this past summer as it began a Mack-sponsored tour.

Two Mack Pinnacles are hauling the truck to appearances across the country through the next year. Then it will come to rest in a newly built Knievel museum that is breaking ground now at Historic Harley-Davidson in Topeka, Kan.

When the need arose for power to haul what John Walsh, Mack marketing vice president, calls “one of the most famous highway trucks in history” on tour, “we knew it just had to be a Mack” doing the pulling, he says.

The tour began in Knievel’s hometown of Butte, Mont., at the July Evel Knievel Days festival, a mecca for purveyors and fans of extreme sports. The “Big Red” Mack led an introductory parade and was positioned prominently next to ramps that carried Gregg Godfrey in a Freightliner to a world-record-length jump, among other jumps.

From there, its many stops included showing at the mammoth motorcycle rally in Sturgis, S.D., and later at the premiere of the Being Evel documentary film in Hollywood. Next was Dallas, where thousands of truckers saw it in August at the Great American Trucking Show.

At a New Mexico scale house en route to Dallas, an inspection ended up with officers touring the coach’s interior on the trailer behind Pennsylvania-based Spiff Services driver Ricky Grubbs’ Pinnacle daycab. “I’ve had five grown men cry on me,” says Austin, Texas-based “Killer” Bramer, who hauls the trailer. The emotion onlookers bring to their encounters with the piece of history is “the best part of this job,” she says.

Its next event is Oct. 15, says Mike Patterson, Historic Harley-Davidson owner and one of the truck’s primary restorers. Westfall-O’Dell Truck Sales in Kansas City, Mo., will host the truck for the day. The dealership was one of the more than 96 partner individuals and businesses that contributed to the truck and trailer’s full restoration, managed by Patterson’s shop over a year and a half.

Patterson says he was drawn into the project after the truck’s owner – ex-pro skateboarder, actor and Knievel memorabilia collector Lathan McKay – “called simply for advice for somebody who could restore the truck.” Patterson “blurted out that we restore Mack trucks,” he recalls, and McKay “believed me.” 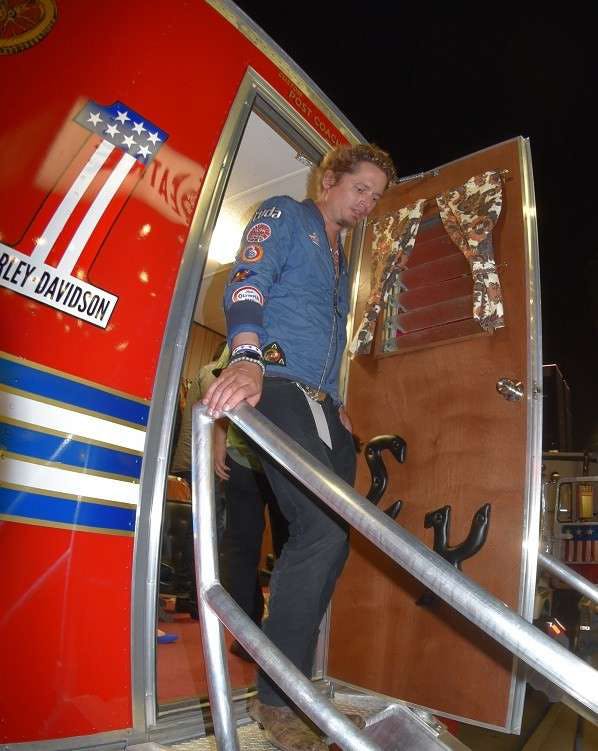 It’s only fitting that the truck associated with a famous daredevil is now owned by an ex-pro skateboarder, Lathan McKay (pictured emerging from the rig’s coach box at its August Hollywood appearance). McKay calls Knievel the godfather of the subsequent decades’ rise in popularity of extreme sports, from skateboarding to skydiving and more. “We always had him in a place of starting what we chased,” he says. Part of McKay’s massive collection of Knievel memorabilia, including leather suits and motorcycles, is traveling with the rig on tour. Photo by Bruce W. Smith

“We teamed with Kansas Powertrain in Topeka,” which rebuilt both the chassis and motor in the tractor, and “Topeka Trailer for the trailer portion of it,” Patterson says. “Todd Williams, nationally known for restoration of all kinds of vehicles, did the restoration of the cab.” The 295-inch-wheelbase Mack is outfitted with a custom box that served as a rolling office for Knievel, originally built by then-Pa.-based Post Coach.

The rig likely will sit idle through the winter, given concerns for the deteriorating effect of road salt, says Patterson. The 2016 schedule will include Mack Trucks hosting the rig at its customer center in Allentown, Pa., for up to a month, Walsh says.

Find more images below, including some links to prior reporting on the rig’s long saga as featured in Overdrive. 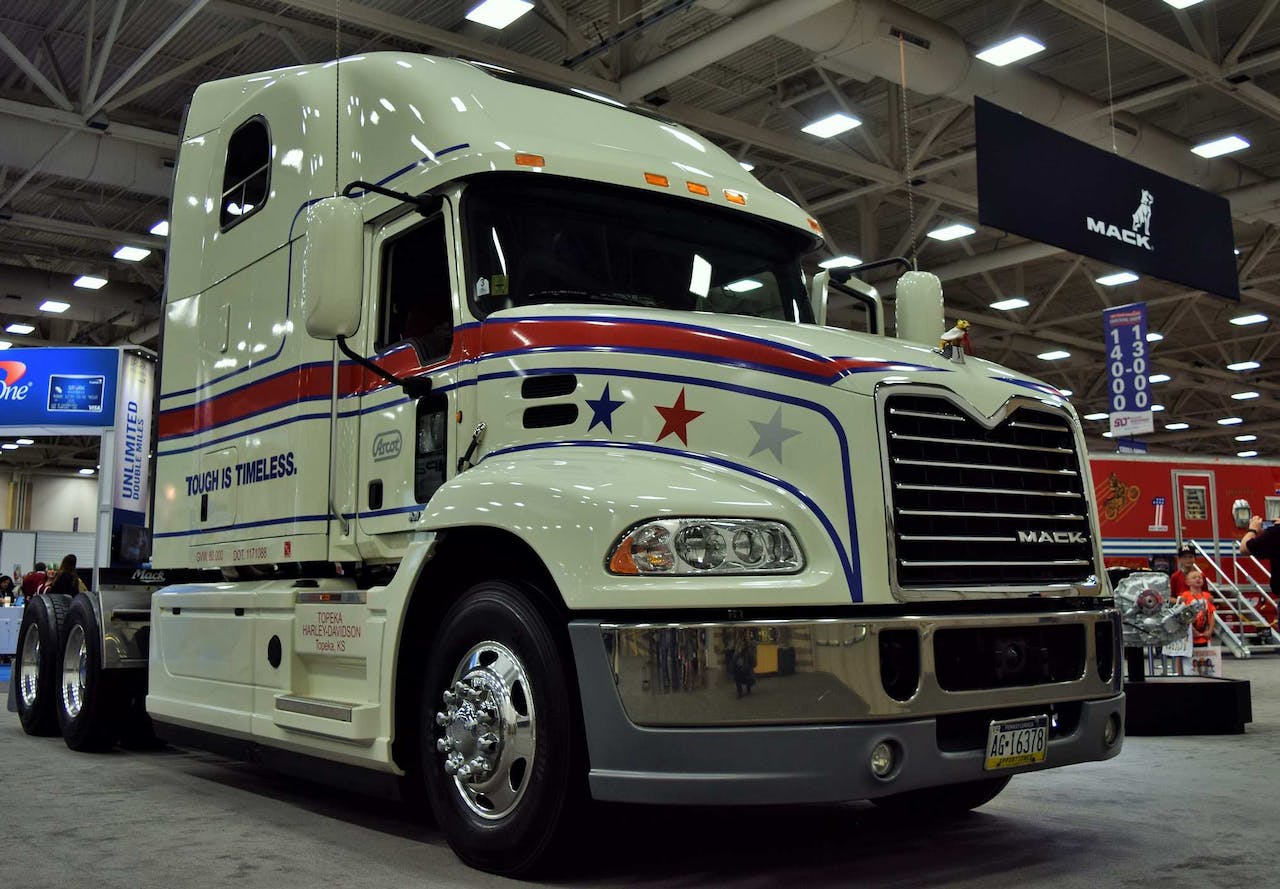 The specially painted 2015 Mack Pinnacles hauling the restored Mack and trailer “send a strong message of what Mack’s capable of” more than 40 years following the original build of the 1974 FS model, says Mack’s John Walsh. Both the sleeper (pictured) and daycab models feature the Mack MP8 engine paired with the mDrive transmission. 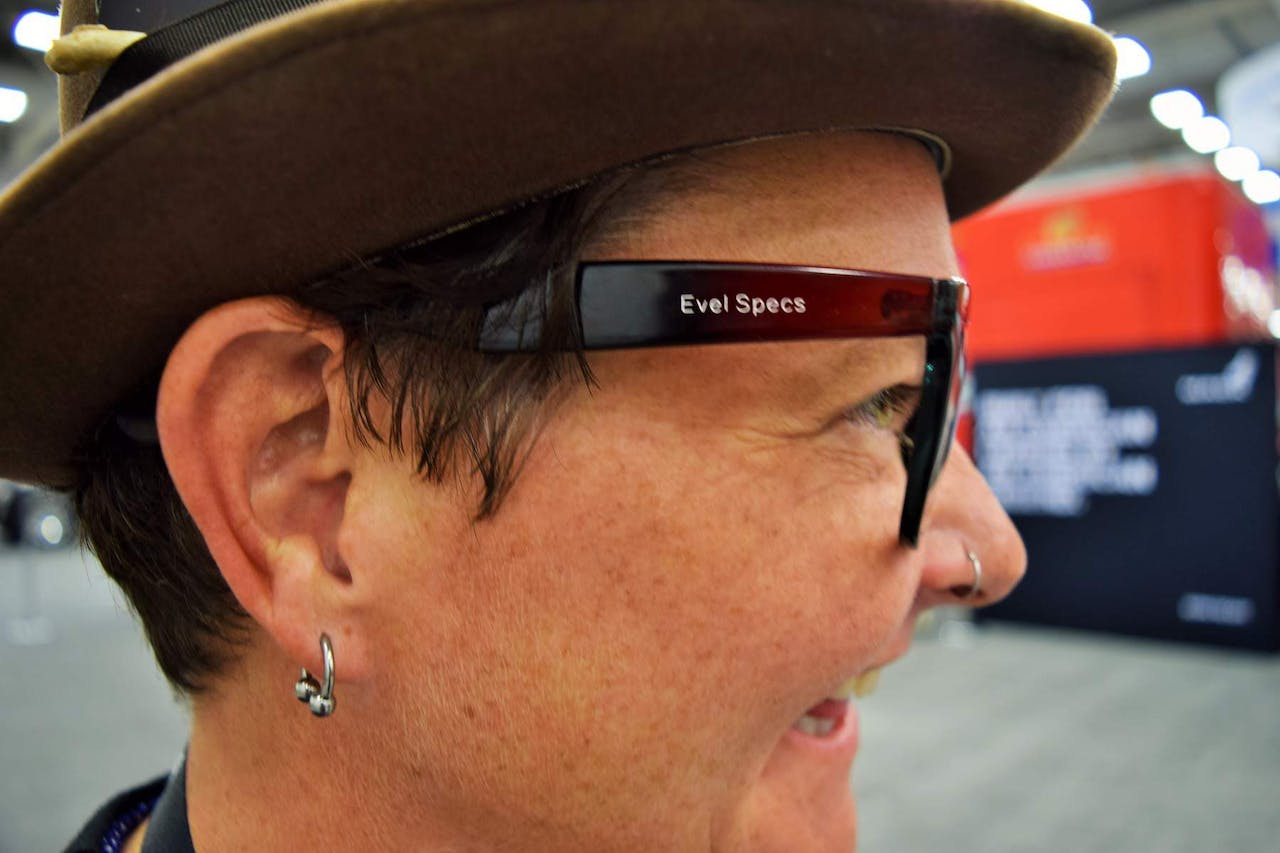 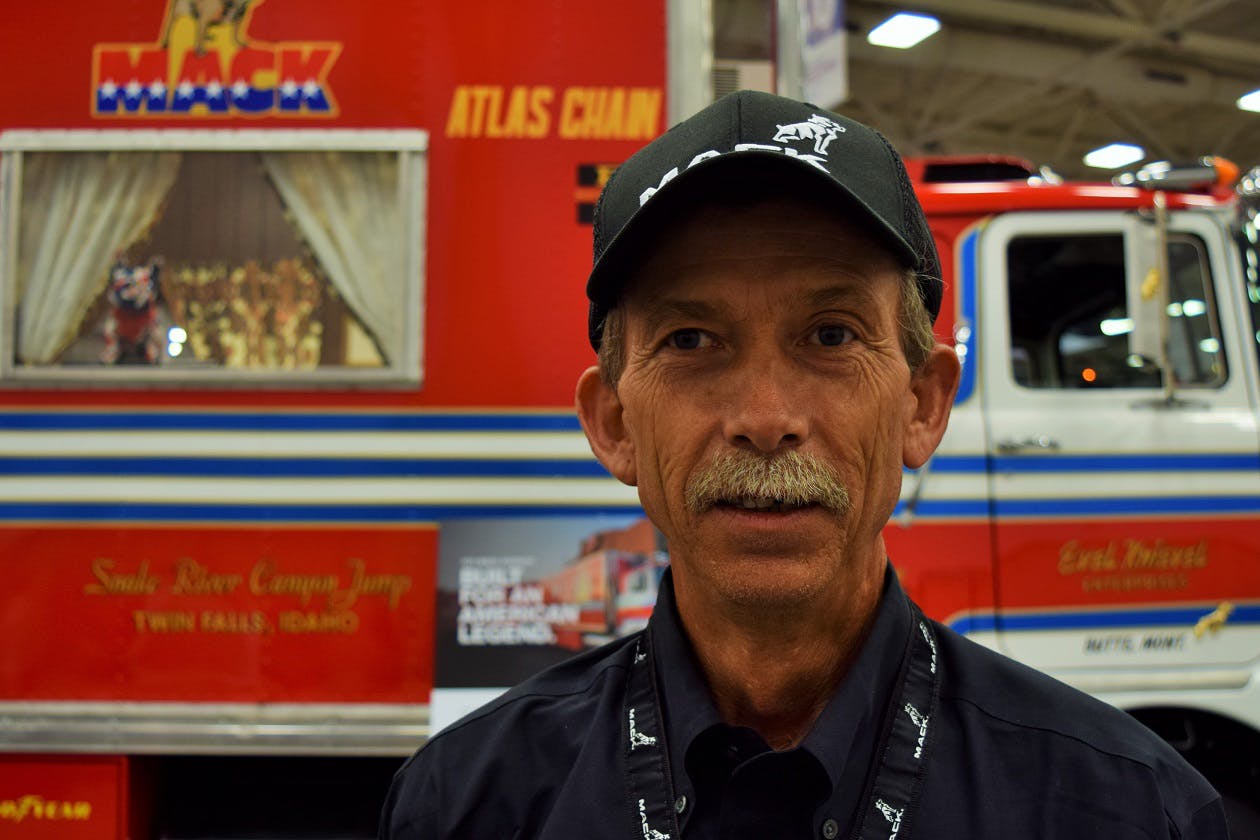 Click through the photo captions for past stories about the unit. 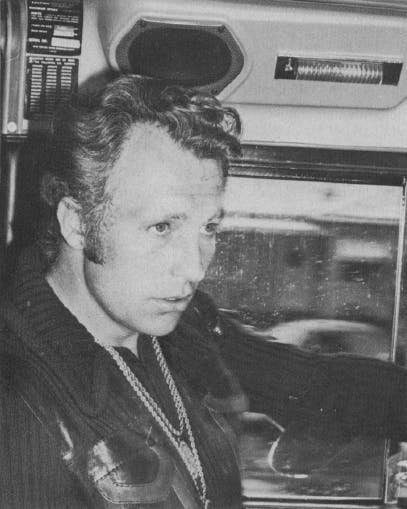 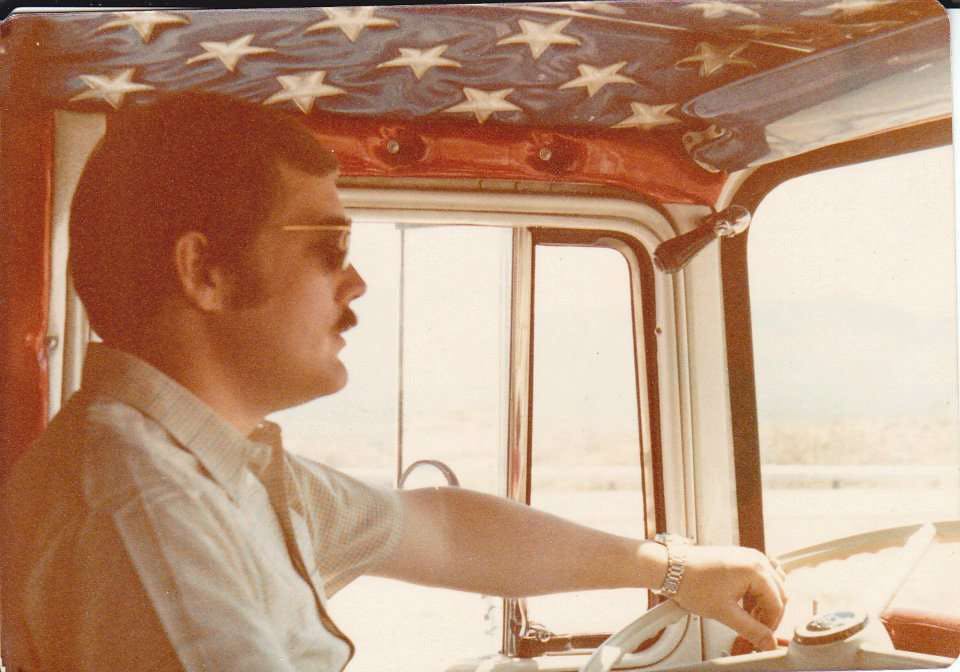 Looking back on running Evel Knievel’s Mack with his former driver, Mike Draper. 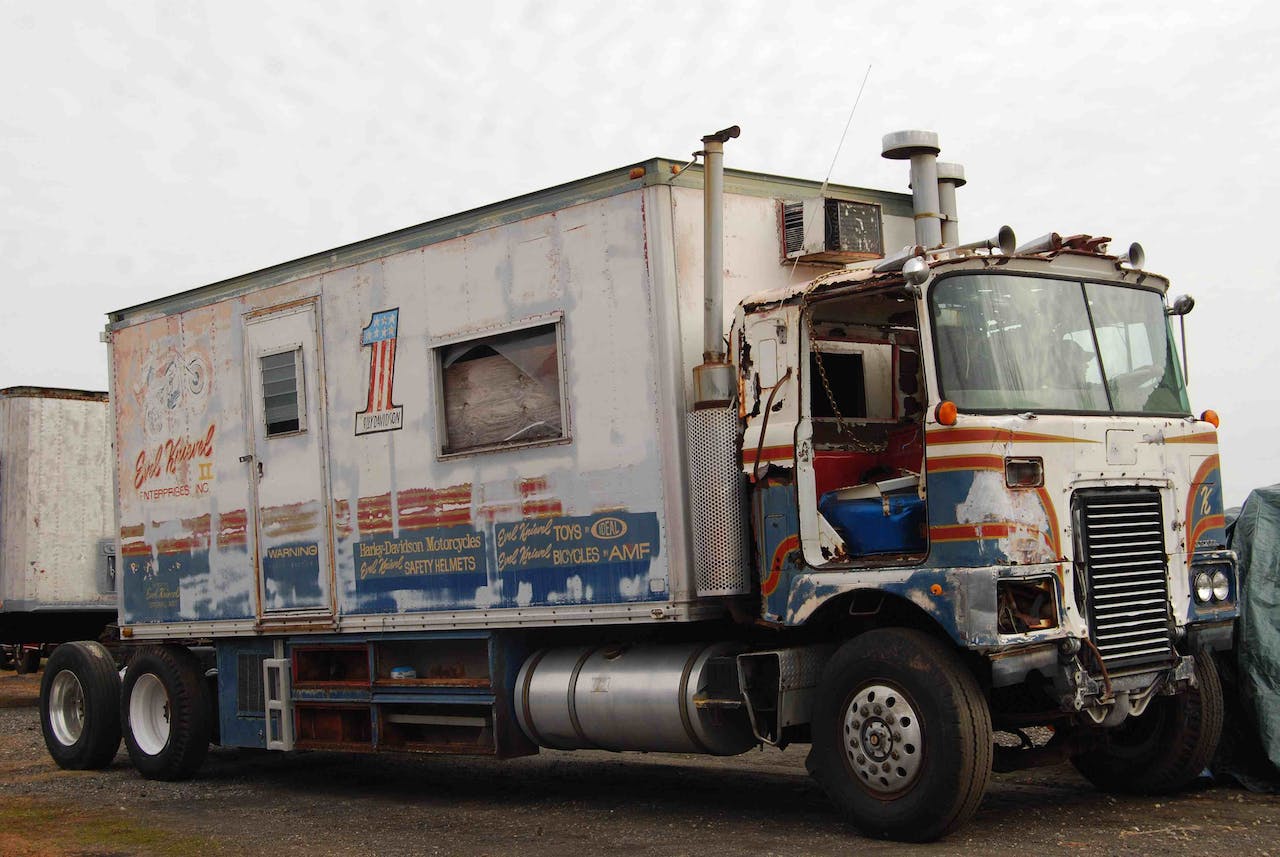 On location in North Carolina in 2012 during early restoration attempts. 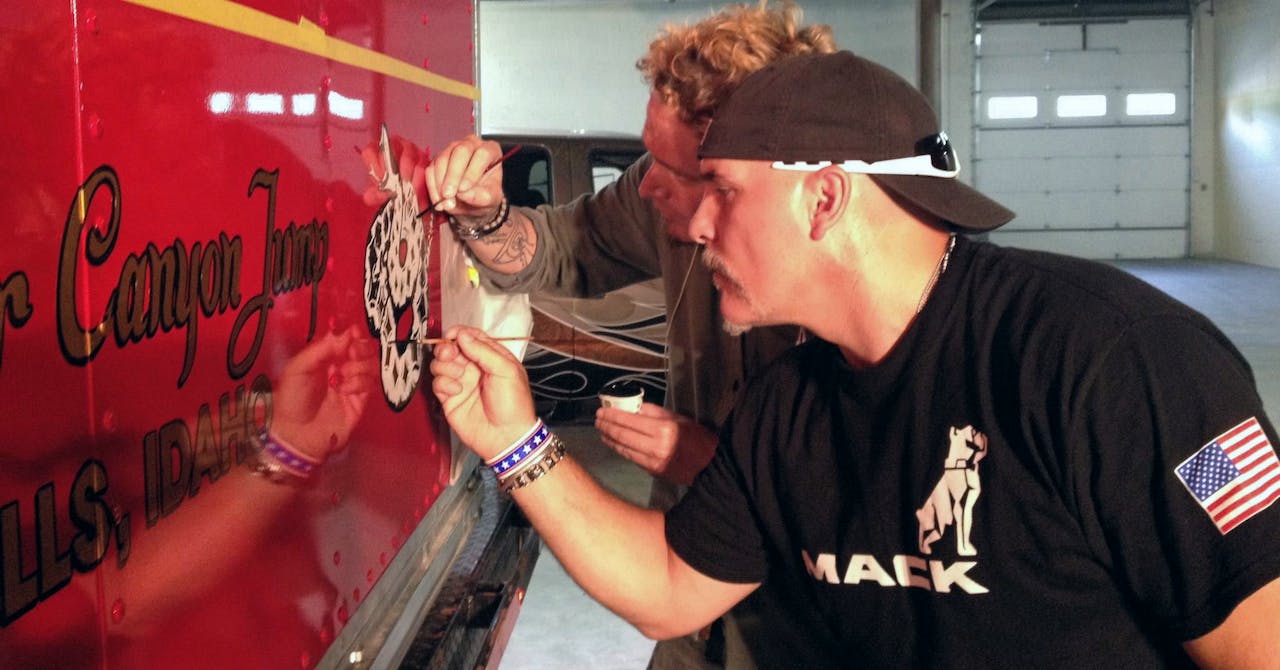 The rig nears completion in Kansas. 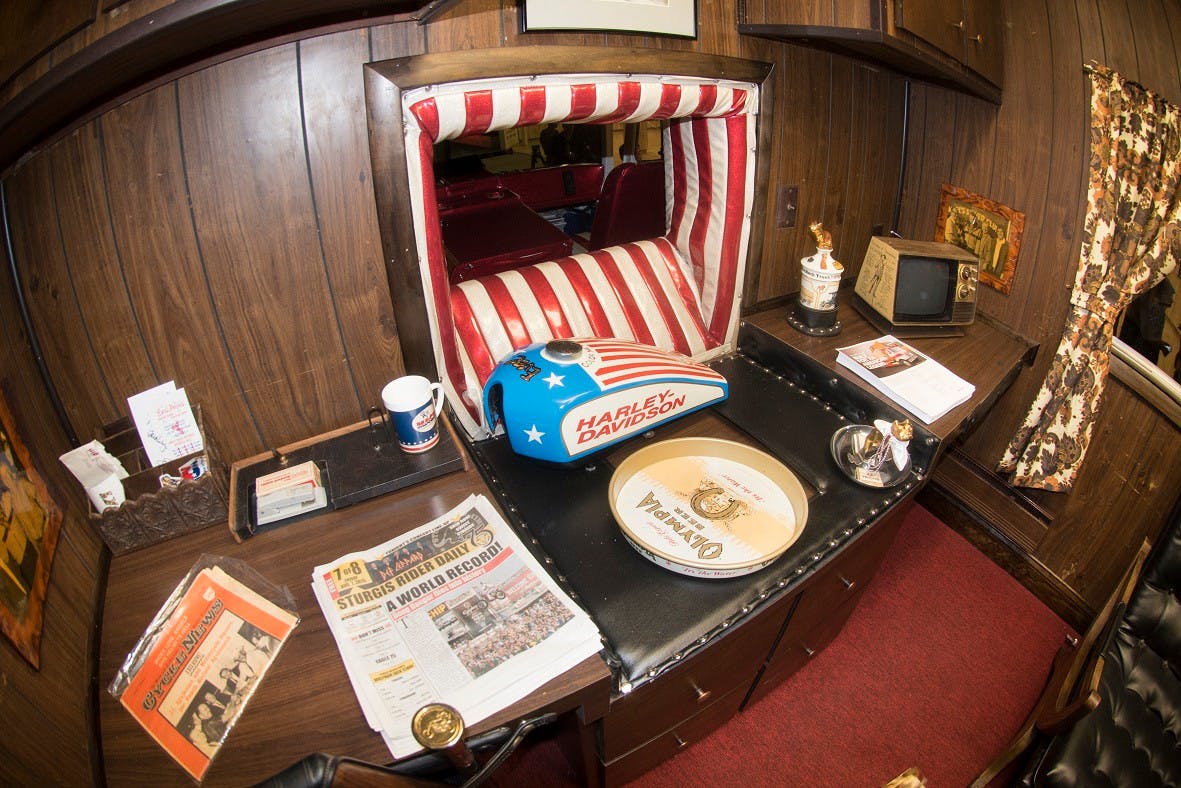 A bevy of detail photos and other information about the truck’s completion. 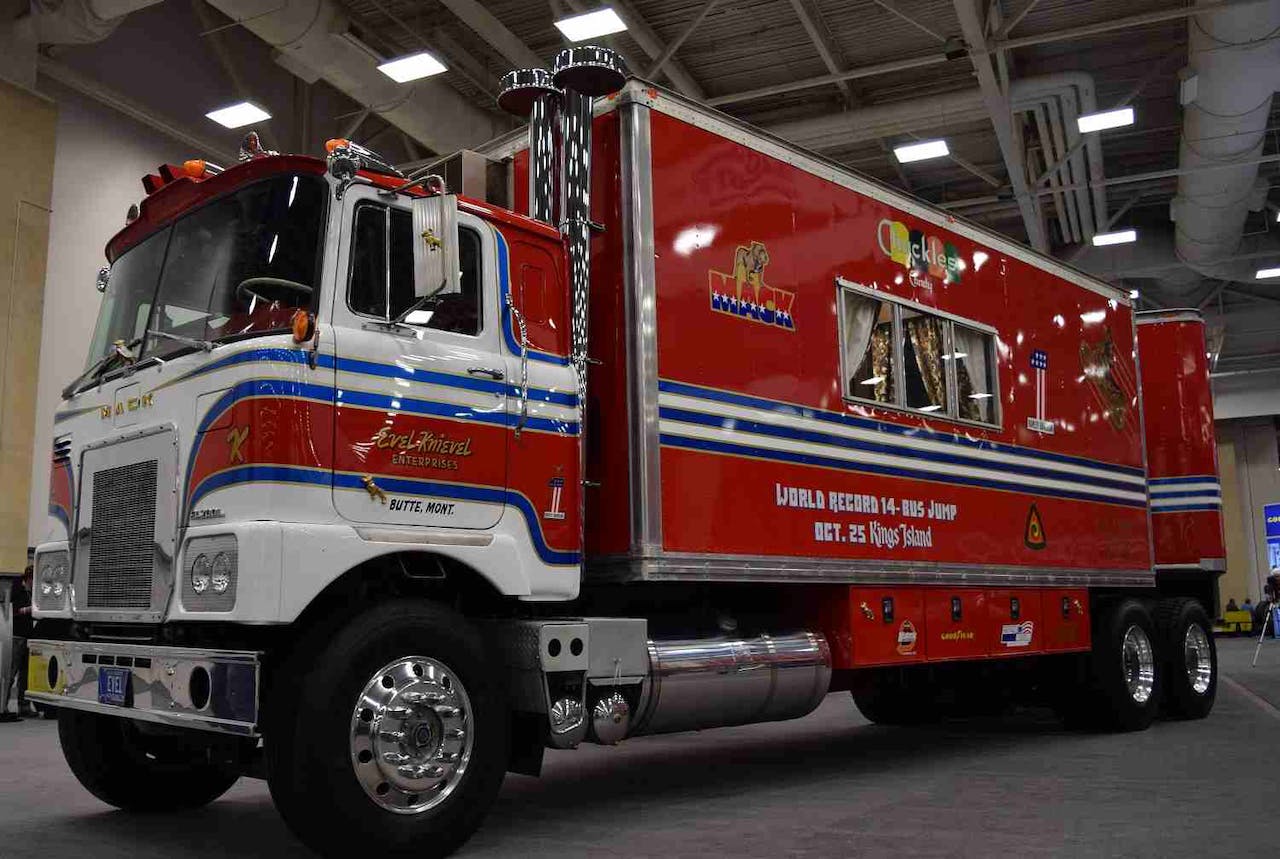 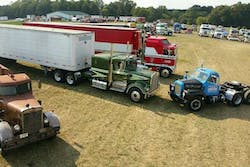 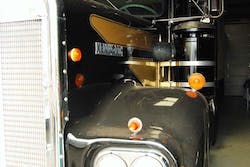 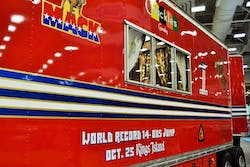 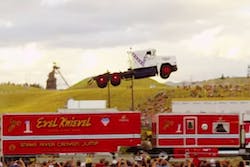 Another Godfrey goes after semi-truck jump record — and nails it