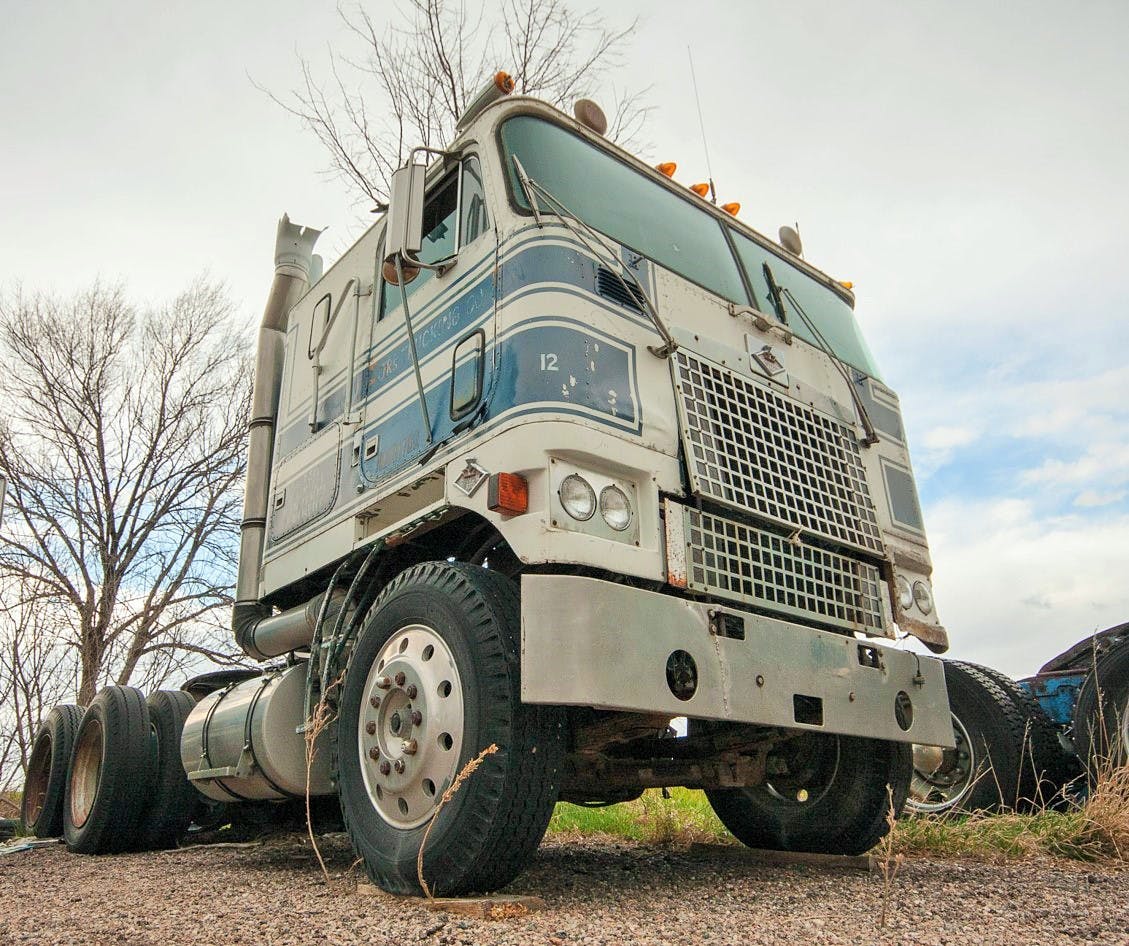 This 1975 Diamond Reo cabover is lates from Cheyenne, Wyo.-based Junior Elmore’s former small fleet to be profiled by Overdrive Extra contributing blogger and trucker Don Christner. Catch all of his stories featuring photography from the Elmores’ boneyard/truck gold mine via this link.

An alternate title for this post might be: The corn-fed kid in Nebraska’s first run with a two-cycle V8 Detroit Diesel — in a 1974 Ford Louisville, no less.

It was 1982. The Louisville featured an orange and white paint scheme and a 318 Detroit and 13 speed transmission. I was 17, a senior in high school, and dumber than a box of rocks.

The truck owner wasn’t much brighter. He’d run a wire-brush grinder with no eye protection.  One of the wires broke off and went into the white part of his left eye. The doc pulled the wire out, and he was going to be OK, but his eye was way too irritated for him to see well enough to drive. The truck was already loaded with corn and needed to go.

I skipped school to drive while he rode along. We came into Goodland, Kan., with the 318 Detroit just roaring in high gear at 2800 RPMs. I was sure we must have been breaking windows along Highway 61. 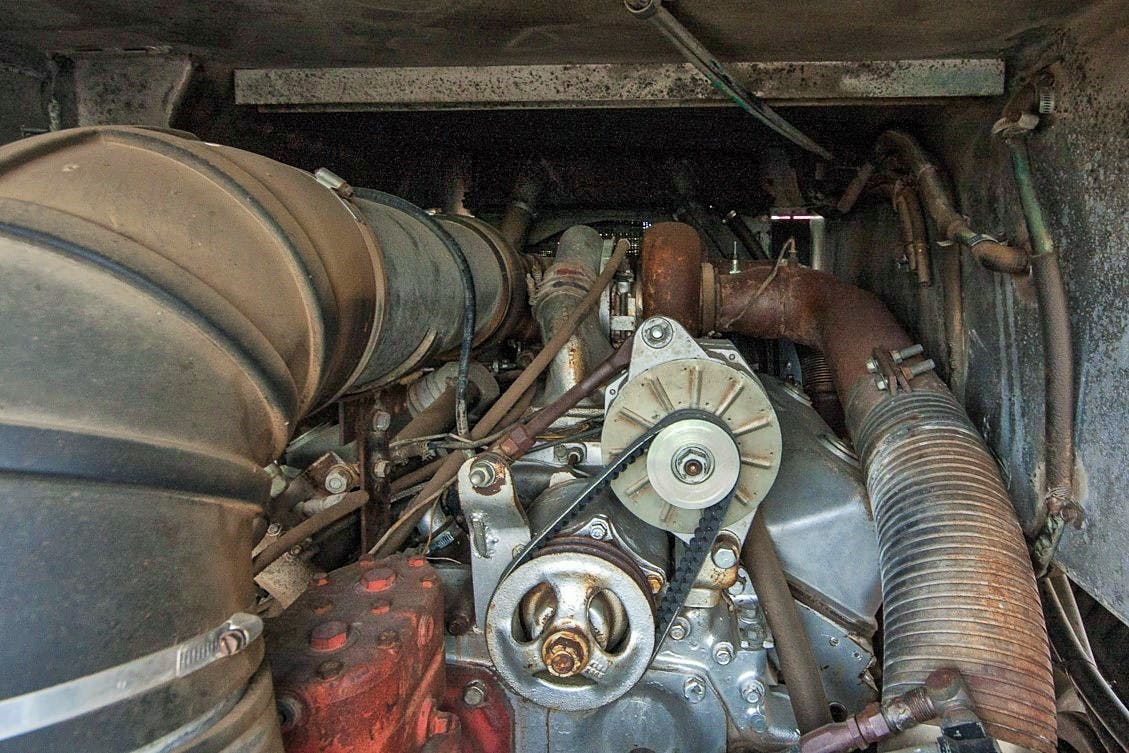 The two-cycle V8 Detroit Diesel, seen here in Junior Elmore’s old 1975 Diamond Reo, was a very different kind of motor than what is on the road today. It had to be kept wound tight in order to get anything out of it. It was kept above 1,900 RPMs — shift early, shift now, shift often! This truck has a gauge for exhaust temperature called a pyrometer. Normal exhaust temperature on your pyrometer was 900-1100 degrees. If the motor was pulled too hard for too long, by keeping your foot in it at too low of an RPM range while putting a lot of air and fuel in the motor, that would turn it into a blow torch and burn holes in the pistons. Especially if it was turned up. There was no computer to manage all this — the driver had to pay attention to the pyrometer.

In the Louisville way back when, the exhaust system consisted of a really long piece of flex pipe coming off the motor and running to about four inches above the cab, no mufflers. The windows had to be kept rolled up while driving or it would cause hearing damage.

I thought I was pretty cool! We pulled up to the fuel pumps at the truck stop in Goodland, Kan. The fuel attendant was right there and he asked, “Fill it up?”

We went to the restaurant and sat down to eat, stopping by the fuel desk on the way out to pay for the fuel with a out of state check.

“I added a gallon of oil,” our fuel attendant said, matter-of-fact.

“Thanks. It uses about a gallon a day,” the Louisville’s owner said.

After being fueled, the fuel attendant had pulled the truck around and parked it in the front row, where we found it: The windshields washed, the air brakes set, the motor left running, doors unlocked. As we approached the truck I could see a small puddle of oil on the ground under the front of the motor. No cause for alarm. I was very excited to drive. It all seemed normal at the time. 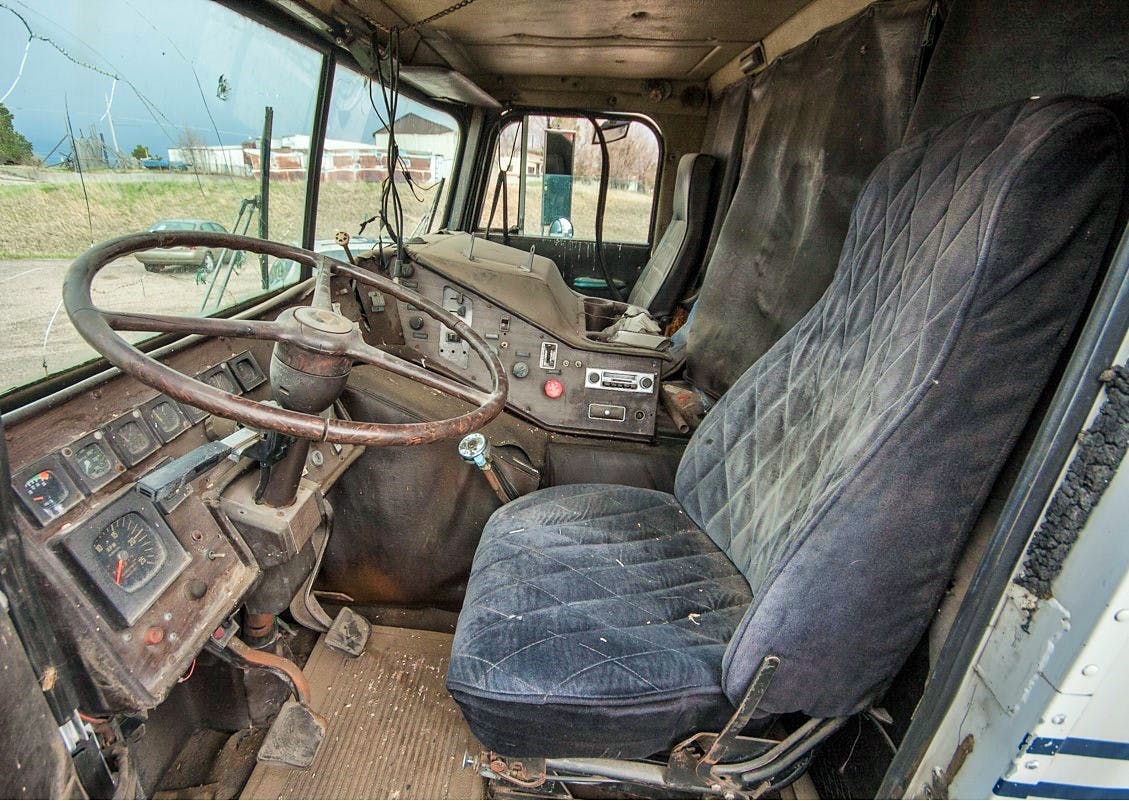 In addition to keeping a close eye on the pyrometer, drivers would also add a small mirror that watched the top of the exhaust stack to get an even sharper eye on the exhaust. They could tell if they were running it too hard. Even running it right, all that heat is going into the exhaust manifolds on both sides of the motor, which is only a foot away from your ankle and just covered by the dog house. When you’re driving this truck, you’re  sitting right beside and above the motor. You and that motor were just kinda personal, together, right there — heat, noise, vibration and all. 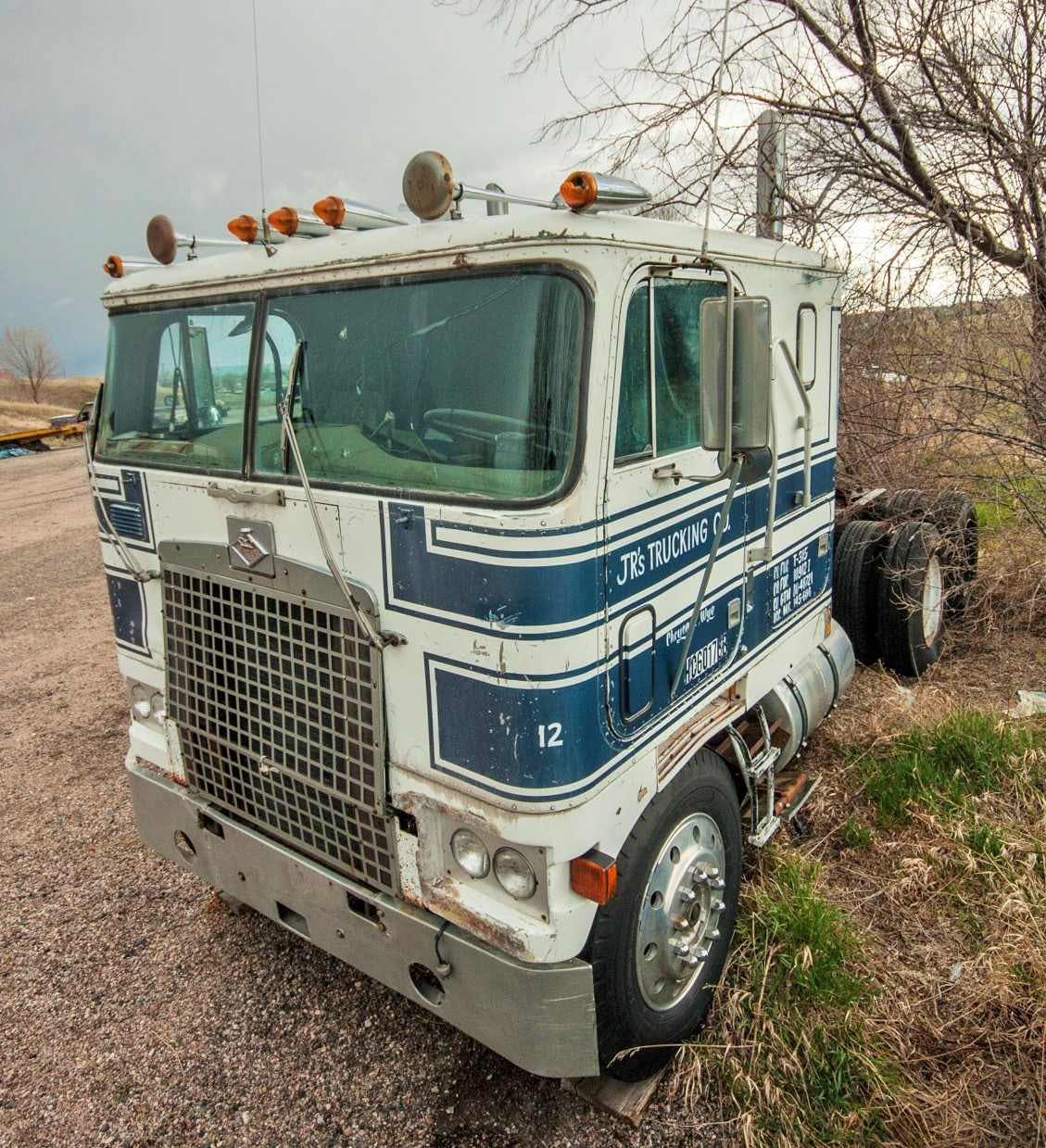 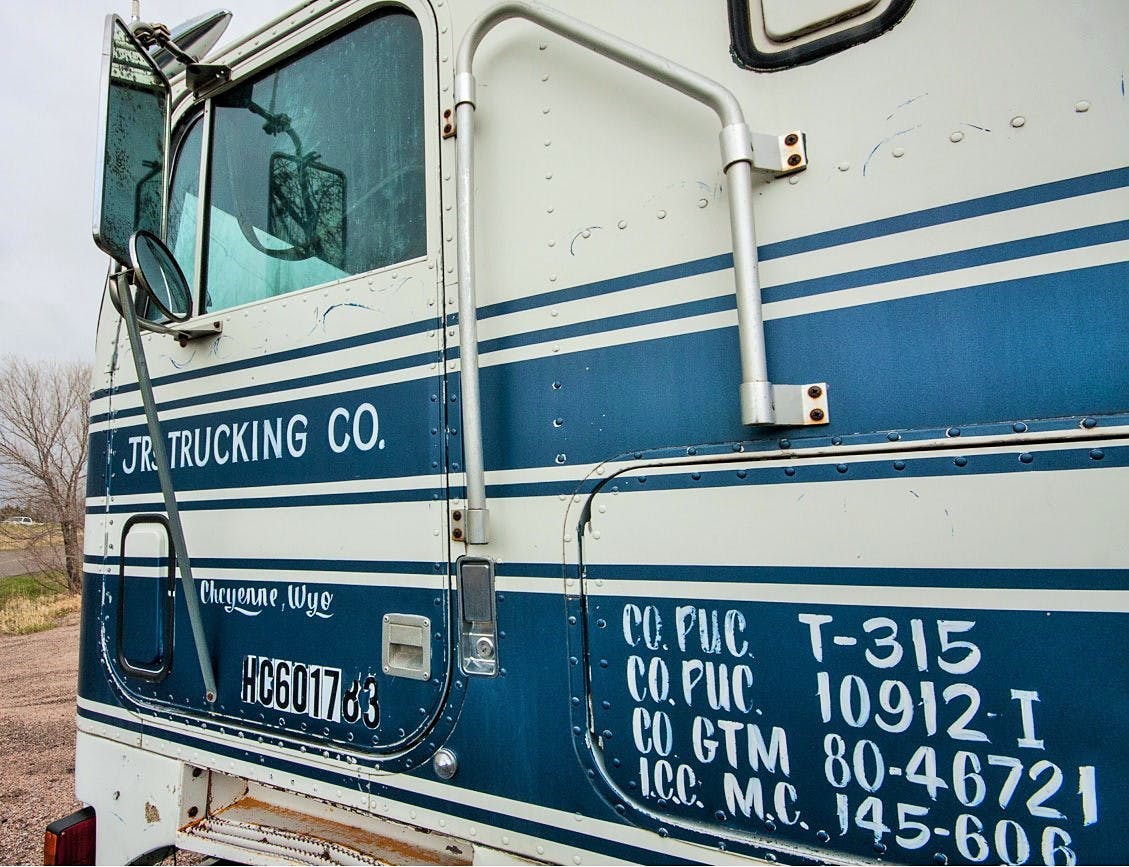 The door latch is on the side of the cab, not on the door. Like most trucks, it came from the factory with the turn signal lever held on to the steering column with a radiator hose clamp. It has a huge Diamond Reo steering wheel, so the driver can have extra leverage. Lighted steps. This truck is complete — really nice parked condition, with no parts removed. 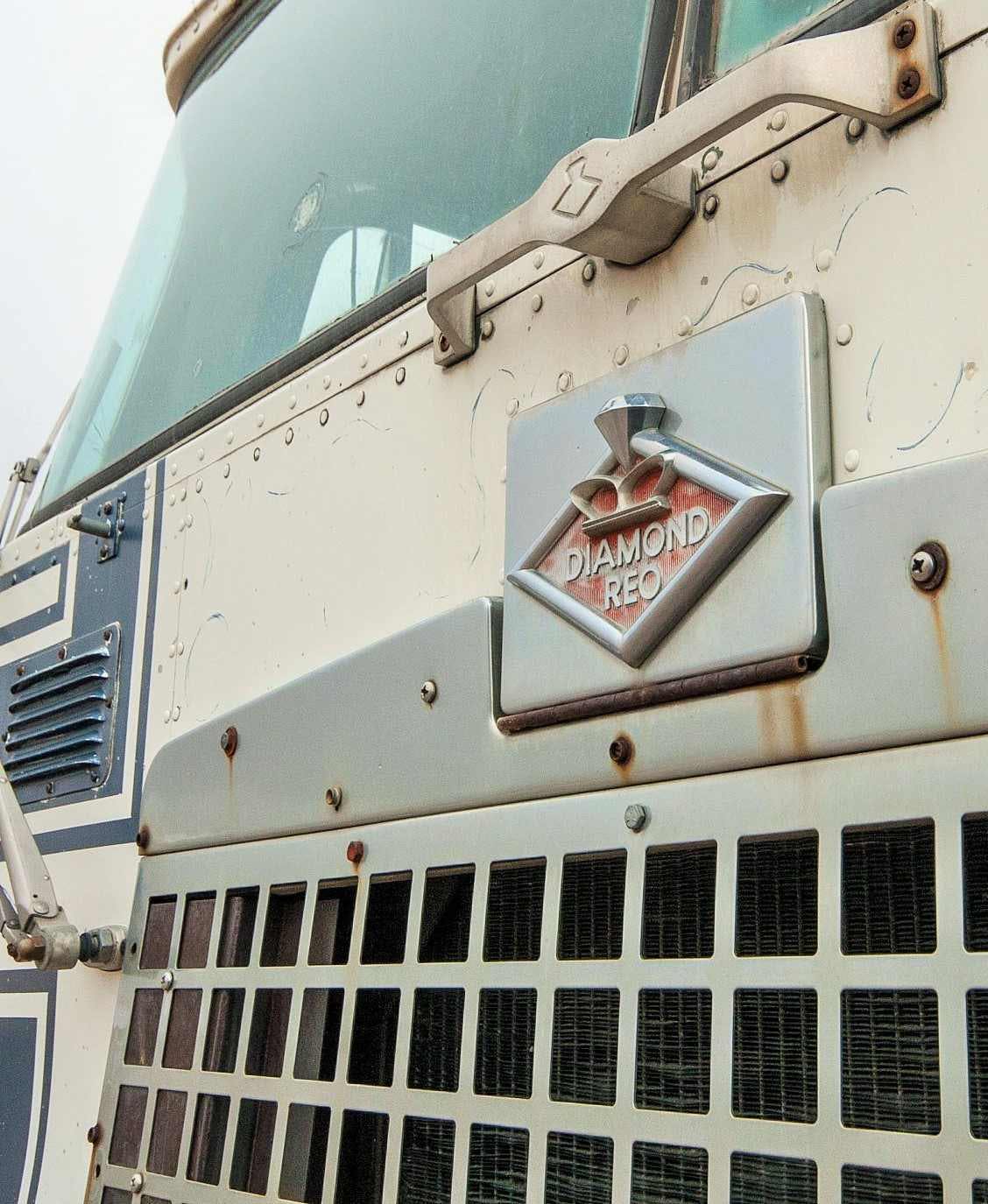 I frankly haven’t see a Diamond Reo Cabover on the road in 30-plus years. Several years ago, I flunked my annual safety ridealong because I didn’t exit the cab of my conventional truck with three points of contact, so I had to have an hour of training. A lot of companies have a policy against leaving the ground to wash the windshield. In the hazardous materials safety world that I work in, they just wouldn’t let you drive a truck like this because of liability getting in and out of it. I’m trying to imagine a DPF filter on a two-cycle Detroit Diesel motor like this! A DOT inspection with oil leaking out of it would be a tough sell at the scale house today, no doubt. You just couldn’t build and run a truck like this new today. The drivers that drove these trucks from this era are proud of the work that they got done with them. I sure would like to see it restored and preserved.
Related Stories 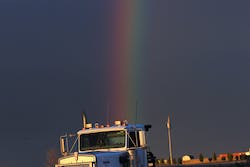 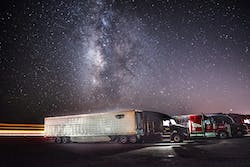 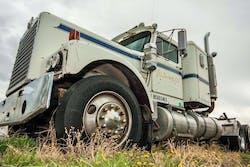 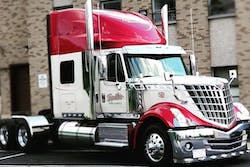