I was driving on a gravel road here in Wyoming when the sight of a big Marmon COE unexpectedly caught my eye. I hadn’t seen one in years. There were more unusual trucks in this yard, trucks from the 1970s and early 80s carefully parked in a row: The Marmon, a Diamond Reo cabover, too. A Mack Superliner, a Diamond Reo conventional and an Emeryville.

These are the trucks that were on the road when I was a young man, straight-up-honest work trucks from an era that’s gone and almost forgotten. There was a freedom and a high sense of ownership and responsibility from that time that now seems gone from trucking.

I absolutely had to take pictures, but there were “NO TRESPASSING” signs everywhere. I needed permission, but didn’t know who owned these trucks, and no one seemed to be at the house whenever I stopped by. And I stopped there several times in the weeks and months that followed.

Then a friend at work, Lynn McColl, and I were having coffee one morning and I told him about the trucks. “Oh, that’s my cousin!” he said. He put me in touch with Machelle and Ralph Pike, daughter and son-in-law, respectively, of Junior Elmore, who owns these trucks. I was able to talk with them about the trucks, and take photos.

Elmore operated a successful trucking company, Junior’s Trucking and Towing, out of Cheyenne, Wyo., from 1966 until 1999, when he retired. He’d worked hard to get his own Interstate Commerce Comission authority before Deregulation, and operated independently. He had 20 trucks at the height of his operation and also owned the full-service Conoco station on Lincolnway in Cheyenne, part of the old Highway 30 corridor before I-80 was finished through town. A heavy-truck repair shop went along with the towing and recovery.

Junior’s Towing would even clean up train wrecks. The man had a lot going on.

Ralph Pike recalls just how clean his shop was, the ceiling and floors painted blue while the walls were painted white. Drivers were not allowed to start a truck in the shop. You put it in gear and released the brakes, starting it in gear as it drove outside and mopping up any snow or ice that may have melted off.

Junior had very-well-maintained tractors with plenty of chrome, even taking the steel bud wheels to Denver, Colo., and having them chrome plated. When the Cheyenne Frontier Days festival came around in July, Junior’s drivers would polish up the trucks and they would drive them in the parades.

Letters and post cards from all over the world would come in from people that saw them in the parades. I took careful notes about each truck, and I’ll be writing about each one and sharing photos in posts over the next several weeks.

Stay tuned, and see them for yourself!

Next in this series: Diamonds are a girl’s best friend: 1974 Diamond Reo conventional 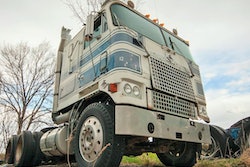 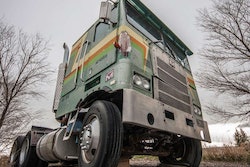