Owner-operator Bill Ater sent along the above picture this morning after having been off the road since March 19. “If the guys are smart and they have planned ahead” for a rainy day, as it were, he said, they can “take this time to work on their equipment and get it into top shape.”

That was Ater’s decision, of course, as he saw freight to load his step deck, in a leased operation for many years now with Landstar, falling in demand early-mid last month, and figuring it was only going to get worse. He figured right on that score.

“I decided to get my front end repaired,” he said, for one, having gotten clipped while parked by a newbie owner-operator pulling an RGN in Fort Campbell, Ky., that had him looking like a “fancy container hauler,” as he put it, after he patched part of the hood with some sheet metal around the headlight and blue tape, and “straightened out the bumper.”

The offending party paid for that work, but while he was at it he went farther with something he’d had in the back of mind to do for a while. “A 1999-model paint job with a brand-new hood — nah, that wasn’t going to work,” he said. He got to looking back at the old 1980s paint jobs and some of the trucks he and his father drove in those days and further back, saying to himself, “take a little of this here, a little of that there,” and the above is the end result (the stripes are vinyl).

Meantime, he worked on his step deck, his chains and binders — “I’m ready to go, but there’s nothing to haul, man,” he said. “If I pulled a van it might be different, but I’m not going to work for fuel. I guess my next project is to pull the fuel tanks off, put some rubber behind the mounts” and get to some serious polishing. “I’m looking for stuff that’s old and deteriorated” and refurbishing as he goes.

With the $310 billion re-up in Paycheck Protection Program funding as of late Wednesday, the Small Business Administration will be processing further emergency-assist forgivable loans for small biz in the very near term. Ater’s crossing his fingers he might count on that for something, with an application already completed for around $16K through a local Texas Trust Credit Union branch — not his principal banking institution, interestingly. His main bank was prioritizing larger commercial clients, he heard early on in the program, during the first round, so he “took $500 over [to Texas Trust] and opened an account through the drive-through.” His application didn’t make it through the first round in time, but he’s been assured the bank is getting it in this time. (The SBA will reportedly prioritize smaller community banks’ and credit unions’ applications this time around, so he may be in good position.)

If that doesn’t come through, Ater, who pays himself a salary through his S Corp business structure, said “I’ll lay myself off and collect unemployment.”

Owner-operator independent contractors of all stripes do have that option as a backstop through this crisis, though state unemployment divisions called on to administer the new option to out-of-work contractors have been overwhelmed by standard unemployment claims, as has been obvious in the record-setting speed and numbers of claims through the last month and more. Reports abound of contractors remaining in wait of assistance.

I’ve had a series of conversations with a Texas-based contract driver over the past couple of weeks about the decline of his own work driving for a hotshot truck and gooseneck trailer owner. The business hauled almost exclusively oilfield-related equipment, sometimes without the trailer (the 2015 one-ton hotshot is outfitted with a flatbed). Business was already slow with the fall in oil barrel pricing and U.S. decline in oil and gas before the coronavirus pandemic was declared.

A week ago today that contract operator filed through the normal unemployment system, putting himself down as employer. As of this morning, he said, he still hasn’t been able to make contact with or been contacted by Texas Workforce Commission since, and TWC issued guidance to the self-employed for the pandemic-related unemployment assistance only this past Wednesday.

“Tried calling again,” the driver in question said this morning. He didn’t get through. The answering system “said to call back later or go online.” When you go online, of course, it “says to call.”

Customer service may not be today’s unemployment office’s strong suit. You get the picture.

Generally, the process as explained by Texas’ Wednesday guidance, as is explained in other states as well, is that first-time applicants will utilize standard unemployment applications, then when they are turned down, will be evaluated for the special pandemic assistance for contractors and automatically enrolled if qualified. What’s it all worth? At least each state’s weekly minimum benefit, plus $600/week for the term.

If you have to go that route to keep afloat, use what’s available. Remember: It flows through your home state’s unemployment program.

As for Ater, he pulled $10K from his line of credit to his checking account just in case he needs it while he waits for the SBA loans to process. “I won’t draw down any more of my company account,” he says, as he waits. Thankfully, he feels like he’s well-prepared to weather it all. For those who weren’t, for whatever reason, “it’s not going to shake out well. I just won’t haul freight for nothing. I’ll sit back and wait.”

Aaannnddd… Final thought for the weekend. How’s Fruit of the Loom for a mask, should the need arise? So quipped Rob Hallifax about his “quick solution when forced to put on a mask.” He added, crucially, “Just make sure they are clean ones!”

Gotta appreciate a man who can keep his sense of humor. 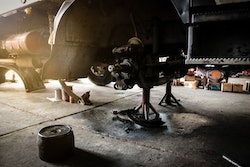 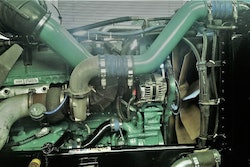